He Knew What He Signed Up For 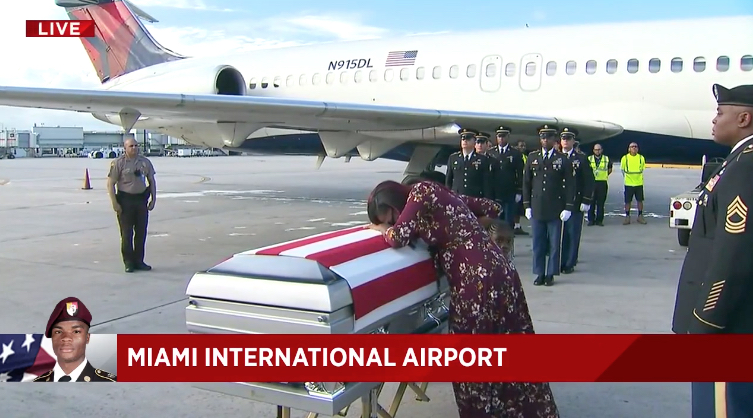 This is what the President of the United States did today:

President Donald Trump told the widow of a US serviceman killed in the ambush in Niger that "he knew what he signed up for, but I guess it still hurt," according to Rep. Frederica Wilson.

The body of Sgt. La David Johnson was returned home to the Miami area late Tuesday afternoon, with the plane receiving a water cannon salute as it arrived near the gate.

The call from the President to Johnson's widow came shortly before Johnson's casket arrival, Wilson, a Florida Democrat, said on "CNN Tonight with Don Lemon" Tuesday.

"Basically he said, 'Well, I guess he knew what he signed up for, but I guess it still hurt,' " Wilson said, adding that she listened to part of the call on speaker phone while in a vehicle with the family.

"He Knew What He Signed Up For."

Maybe it would be better if the president just didn't call anyone or write any letters because, holy Mother of God, that's just not helpful.

"He Knew What He Signed Up For."

That sounds like something you tell a guy who joined a fantasy football league that just went 0-16. That's not what you say to the widow of a Green Beret.

I have so many things to say, but they involve a litany of curse words best left unsaid right now.

I am so deeply sorry for this woman and her children. As a veteran, and as a former member of the United States Army, I just do not have the words anymore.

This president is of no use, no comfort, no consideration, to anyone or anything. He is just a non-descript and incapable individual. He has nothing to offer. He has no standing, no composure, no decency and no remorse for anything that he does. He is just a walking bag of meat, filled with hate and spite, and incapable of doing anything that benefits anyone but himself.

"He Knew What He Signed Up For" is what should be emblazoned all over Trump properties all over the world. These words should be used to shame this shameless old rancid sack of rotted flesh.

Everyone's prayers should focus on this family, and the families of the other fallen soldiers, and for everyone suffering tonight because of the events of the year so far. This includes those who are neglected, those abandoned, those ravaged by storms and those stranded on our borders. There are untold numbers of people in pain, in torment, and they are trapped in the arms of loss and sorrow.

If the president cannot be of any use to them, then it is up to the rest of the country--the remaining decent parts that did not bring this down upon the American people as a whole--to lift them up and to hold out for better days.

I am now too mad to cuss.

UPDATE 1: It would appear that Trump didn't even know the man's name. Outrageous.

UPDATE 2: No surprise that there are people actively trying to cover for the POTUS. If this was an atypical, out-of-character statement for Trump, it would be easy to defend him and easier still to discredit the Congresswoman and the family members who heard what Trump said. Since this was very, very consistent with all of the other cruel, insensitive, ignorant, and indignant things that Trump has been saying publicly for years, it is improbable that Trump's version of anything will be proven correct.