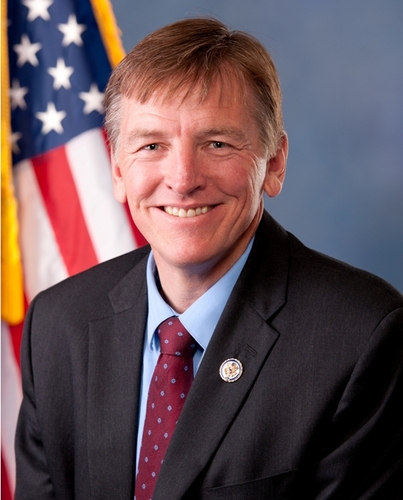 This is Arizona Republican Congressman Paul Gosar, and he's a bag of nuts:

Rep. Paul Gosar (R-Ariz.) on Wednesday doubled down on his conspiracy theory that Democratic mega-donor George Soros could have been involved in organizing an August white supremacist rally in Charlottesville, Va., saying "proof will be coming."

"My proof will be coming; check my website out," the Republican lawmaker told CNN reporter Randi Kaye.

"It has not been debunked, absolutely not debunked whatsoever. So stay tuned," he added, when asked why he is pushing a baseless conspiracy theory with no evidence to support it.

Gosar goes on to tell the reporter that CNN is "fake news."

There's no proof on his Goddamned website. What a crank.

On conservative websites, citing "George Soros" is coded language used to indicate a particular strain of anti-Semitism that does not get talked about. There is no legitimate reason to focus on Soros and his support for left-wing causes because there are a hundred billionaires supporting right-wing initiatives at the same time.

The left has Soros?

The right has an endless line of Kochs and Mercers and Waltons and Adelsons and so on and so forth. If you include multi-millionaire donors who are seething with white-hot anger (did you see what I did there?), the GOP is overflowing with intensely angry and disappointed people who are going to think twice about turning over bags of money in 2018.

This crowd is well on their way to a class revolt. Hell, they have a billionaire president now and nobody says boo about that.

Gosar is a Trump wannabe, and he should be hit hard and mocked for his ridiculous attempt to make himself relevant in American politics.