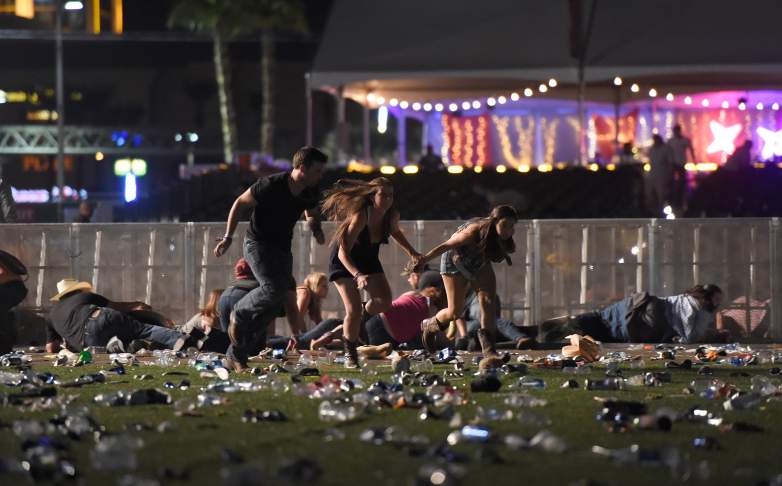 Stephen Paddock is a domestic terrorist. To consider him a "lone wolf" is to absolve him of the fear that he caused by firing what appears to be a fully automatic weapon into a crowd of people. In other words, it's another day in America. It's another mass shooting. It's another senseless act of domestic terrorism. It's another horrible fucking thing that has happened to innocent people who didn't ask for this and I don't even want to know what our president is going to say:

At least 50 people were killed in a mass shooting overnight on the Las Vegas Strip, police said, the deadliest in modern US history.

The gunman, 64-year-old Stephen Paddock, was firing from the 32nd floor of the nearby Mandalay Bay hotel, Lombardo said. Paddock was eventually killed by police.

The scene above is what a country without a soul looks like. You see chaos, fear, panic, and terror in that image. It was caused by a man perched on high with a gun, shooting down at others for no good Goddamned reason. This is the country we live in. This is where things like this get to happen. This is America, circa 2017. Our sense of community is gone. Our sense of civic virtue has evaporated. Hear bullets? Run, son. Grab your girl and go. It's fucking crazy out there. Next time, maybe stay home? I don't know anymore.

I hate the fact that I already know that gun sales will go up after this incident. That's because, in this country, gun purchases have slumped since the 2016 election because, with Republicans in control of all three branches of the government, the gun lobby has no one to hold up as an enemy of the 2nd Amendment. There's no one coming after the guns, you see. There's no one with the authority to start taking assault rifles out of the hands of everyone's crazy, Alzheimer's-affected uncle Joe Bob. There's no one to start cracking down on illegal sales. There's no one doing anything that will prevent another mass shooting. So now the gun lobby has something they can use to scare people into "stocking up" for some unknown apocalypse. I hate knowing that this is how things are.

My other reaction to this is that it is no comfort knowing that the President of the United States took over thirty million dollars from the National Rifle Association in 2016. It is of no comfort knowing that he conspired with the Russian government to win the presidency so that he could rage tweet at all hours of the day. It is of no comfort knowing that absolutely nothing will be done to keep crazy people away from guns. We don't know anything about the shooter, but, then again, we already know how this is going to play out. The people responsible will, of course, not be responsible for anything. They'll be let off the hook as soon as the media finds an angle that absolves everyone.

There is nothing comforting at all right now, except for one thing. Time marches on. The days go by, and we are closer and closer to the moment where we can elect someone sane to the presidency. If there's one thing to focus on, it is this.