Trump Reverses Himself on DACA Deal 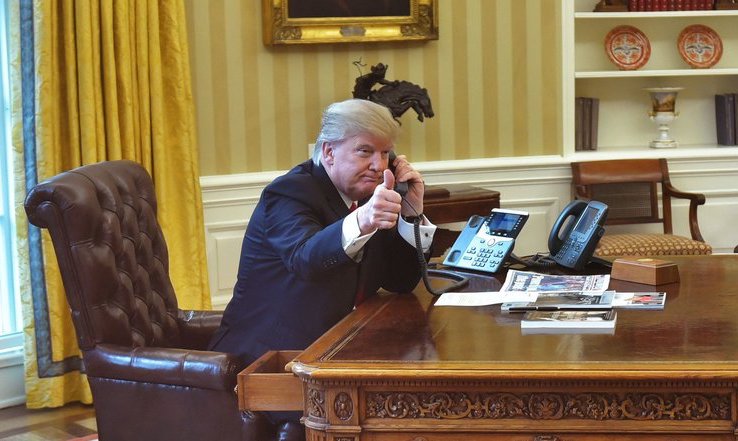 Senate Minority Leader Chuck Schumer and House Minority Leader Nancy Pelosi rolled Trump last night over dinner. They outmaneuvered their opponents and got the president to agree to let the Dreamers stay in America without conceding a thin dime to build his stupid see-through wall (the one that HAS to be see-through so that someone cannot throw bags of heavy drugs over it and smoosh the head of some poor dumb fool on our side).

They reached a deal. They had a great dinner and they probably laughed when Trump ate all the cake. For Democrats, delivering a deal on DACA that did not include building this massive folly of a wall was a win for our side and a loss for theirs. And so, of course, Chuck and Nancy told the media about it. As soon as Trump's handlers realized, with horror, what he'd done, they scrambled to undo his screwup:

President Donald Trump insisted Thursday morning that there was “no deal” with Democrats to extend protections for so-called Dreamers, but pleaded with congressional leaders to reach one, and vowed to push ahead with his border wall.

“No deal was made last night on DACA. Massive border security would have to be agreed to in exchange for consent. Would be subject to vote,” Trump tweeted in a series of posts.

“The WALL, which is already under construction in the form of new renovation of old and existing fences and walls, will continue to be built,” he wrote.

Schumer and Pelosi know that Trump will agree with the last person he talks to, and that they can make him look like a boob any time they want. They also know that their Republican counterparts are on the outs with the GOP's base and that they are living in their own nightmare right now. At no point was there ever a deal. Is General Kelly running things? How many generals do we need in control of the American government? Funny how no one remembers that we are supposed to have civilian control of things and not military control. This American experiment with being a dysfunctional banana republic is really trying the patience of a thinking person.

No one has any control over Trump, and Trump has no idea what he's going to agree to whenever someone can get him in a room and flatter him about crowd size and legislative accomplishments. That's probably all it takes.

All you have to do is say, "you know, the pictures, I don't believe them--there were three million people in the District that day, and half of them were probably using the porta-potty when those overhead photos were taken. What a massive crowd!" And then, when Trump's face lights up like a cheap Jack-o-Lantern from the drug store, that's when you know you can swing a deal with him.

He's the worst president in American history, and he's destroying the Republican brand every time he agrees to something with people who are smarter. Days like today should be savored, if only because they make you want to see what other stupid shit he can do. Tonight will bring more bombshells, Friday will deliver us a factoid that, in previous administrations, would have led to resignation and expressions of horror from pundits. Everything is spinning out of control but there isn't a single Republican with enough personal honor, courage to do what is needed. Hey, you want proof things are broken? Just look at the headlines.