Trump is Going After Your Civil Rights 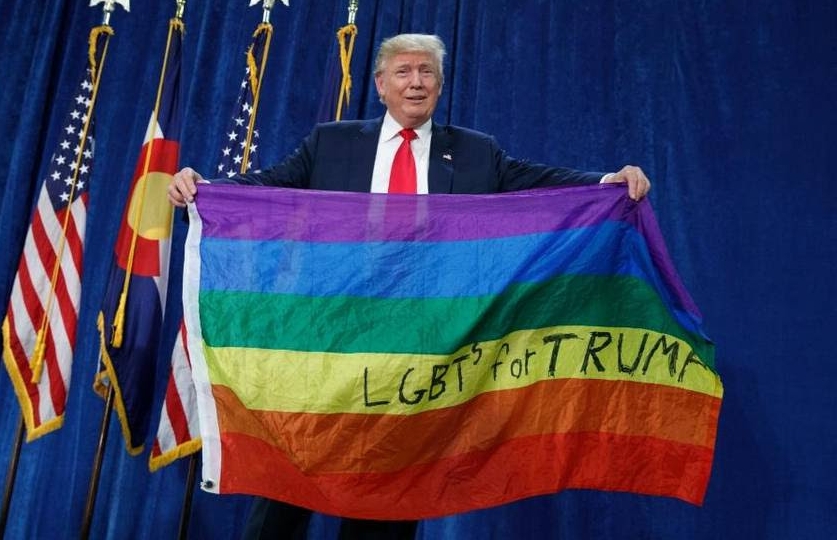 In order to make people forget all the treason, Trump is going to start attacking LGBTQ people because why they hell not?

Why does President Donald Trump care about what gay people do in the bedroom?

The question came up this week, when a lawyer for Trump's Department of Justice argued that the Civil Rights Act of 1964 does not protect LGBTQ Americans from being fired because of their sexual orientation—a complete reversal of the government's position on such matters under previous presidents.

The Justice Department argument Tuesday, before the Second Circuit Court of Appeals, came in the case of Donald Zarda who claims he was fired by his company, Altitude Express, for being gay.

The agency inserted itself, even though the federal Equal Employment Opportunity Commission had already sided with Zarda, arguing that LGBTQ employees are protected by Title VII of the landmark Civil Rights law.

That made the hearing odd, to say the least.

"It’s a little bit awkward for us to have the federal government on both sides of the case," observed Judge Rosemary Pooler at one point in the oral arguments.

But Justice Department lawyer Hashim Mooppan pressed on anyway, opposing the EEOC, which was still run by an Obama administration holdover when the case first reached the court.

"Employers under Title VII are permitted to consider employees' out-of-work sexual conduct," Mooppan told the judges. "There is a common sense, intuitive difference between sex and sexual orientation."

I guess elections really do have consequences. A number of folks probably thought that Trump's accomplished, cosmopolitan daughter Ivanka would be there to keep them safe from the predatory reach of the right wing hate machine that threw themselves all-in with Trump and his crusade to take America kicking and screaming back to the 1950s. Every major social achievement of the last hundred years is unraveling before our eyes. No one can protect you from Trump. Not when a Republican majority in Congress makes shruggy-shoulders and goes off looking for a tax cut.

People who may have begun to settle into a life of being honest about who they are will have to think about how that affects their employment prospects, and it doesn't matter where they are employed. It doesn't matter if we're talking about small businesses or big companies that have embraced diversity. If gay people don't have Civil Rights, then employers are going to react accordingly, and cut costs when the law looks the other way.

This will affect untold numbers of individuals who work at all levels of the Federal government, by the way. The Trump Justice Department probably doesn't know this, but the Federal Government is stocked full of openly gay people who proudly associate themselves with support groups, advisory organizations, and professional development associations that help them navigate through the Federal work force. These groups, populated with good people who should be protected by the law, are a big reason why the government is professionalized and competent, another concept no one who self-identifies as a Republican wants you to know. People who thought that the bigotry of the past was over and done with have been shocked to find themselves living in the horror show of Trump's America.

Hey, Jill Stein voters. Did you vote to take away the Civil Rights of gay people? If you voted for any Republican anywhere to save us from Her E-mails, then that's exactly what you fucking did. I find it hard to believe that a Jill Stein voter would oppose gay rights, but I do believe that that same voter would vote for Trump in order to satisfy their need to protest Hillary. Well, the ramifications of being a purity troll are now clear--a vote against Hillary was a vote against basic Civil Rights. How does it feel to have been a part of that?

There is, literally, no one Trump won't attack in order to continue ravaging the treasury. He and his corrupt regime are stealing whatever isn't nailed down, and, by God, they're getting $500 hammers so they can get as much as they can.