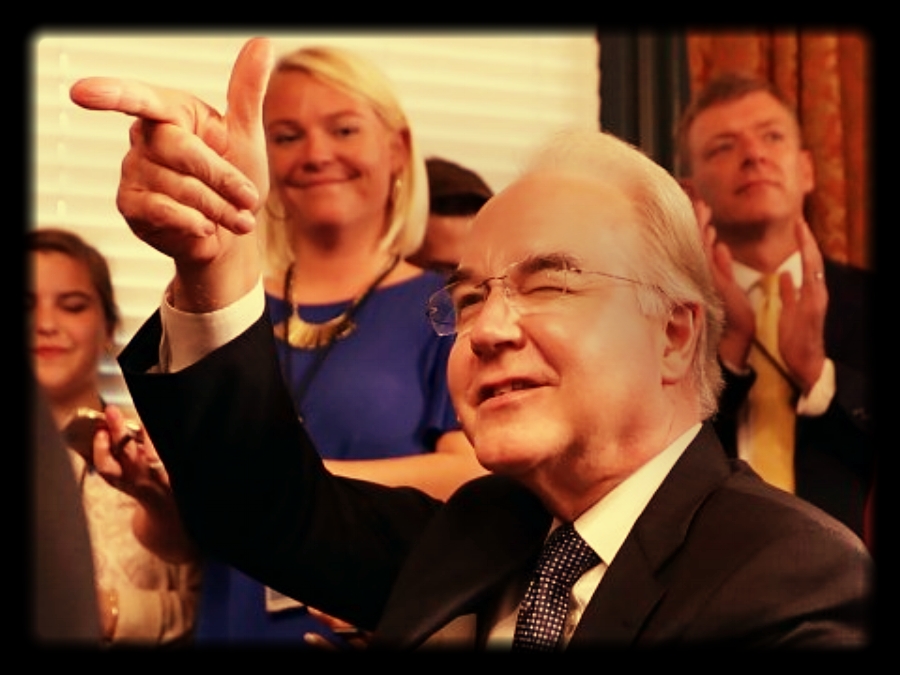 Trump surrounded himself with the worst of the worst. He stocked his cabinet with people who wouldn't have gotten a phone interview in a "normal" Republican administration. Today, one of the biggest crooks in the history of the United States Government fell on his sword and is now running for the hills:

Tom Price, the embattled health and human services secretary, resigned Friday in the midst of a scandal over his use of private planes, a storm that enraged President Donald Trump and undercut his promise to bring accountability to Washington.

Price's departure came as he's being investigated by the department's inspector general for using private jets for multiple government business trips, even to fly distances often as short as from Washington to Philadelphia. The cost for the trips ran into the hundreds of thousands of dollars.

The scandal infuriated Trump, who viewed the controversy as a needless distraction from his agenda. Over the course of the week, Trump fumed to aides about Price's flights, which he deemed "stupid," according to multiple sources. Instead of moving past the storm, Price's offer to reimburse the government for only a fraction of the flights' costs enraged Trump further.

Another day, another fiasco.

Let's not lose any sleep over Tom Price. In approximately three years, he'll be back in Congress because the voters in his state are fucking idiots. He'll never do jail time because he's a Republican. The rules are different for them, you see. Price will keep his millions and he'll feed at the trough like all the other squealing pigs. Maybe he'll become a lobbyist. Maybe he'll just sell his country to the highest bidder and work for Paul Manafort who, it seems, is never fucking going to jail for what he's done.

Price will go back to Georgia's Sixth district and blubber and say he's right with Jesus and they'll send him back to Washington D.C. so he can continue stealing whatever he can get his hands on. Price was not caught with a mouth full of penis and a pocket full of liberal values, so it's all good. The biggest sin he could have committed would be to have shown sympathy for Americans without health care. For being a monster with no principles, Price will always have a place at the table. You peasants can go pound sand. The ruling class are rearranging the deck chairs on the Titanic right now, and Price has to go find a chair in a slightly less ornate ballroom as the waves come over the deck.

It'll be interesting to see if Pruitt and Zinke keep their jobs now that there's another hide nailed to the wall (albeit, temporarily, since no one remembers what a colossal bunch of crooks there are in the Republican Party because the media needs daddy figures). Trump showed exactly as much loyalty for Price as he has for anyone who isn't an immediate blood relation--none. Nothing. Not a penny, not a single bit of loyalty. Trump's entire cabinet is a sock drawer full of scumbags, and every single one of them is so rotten it's a wonder the Federal government hasn't already collapsed.

Kudos by the way for the staffers who ended Price's tenure as Secretary of Health and Human Services, for they are the real patriots. Clearly, the Trump people were not successful in weeding out the ones smart enough to know how and when to leak this to the press for maximum damage.