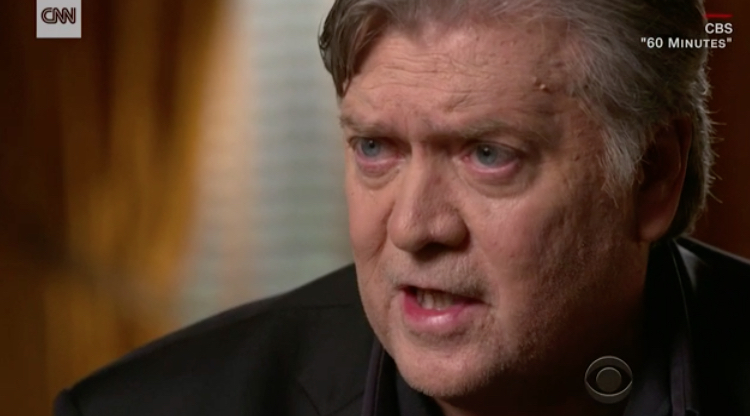 Steve Bannon doesn't live in our world. He lives in a made-up world full of demons that only he can see. He's a weird, filthy animal who has given up trying to make sense of the people who actually do things in this country, which he hates:

In a "60 Minutes" interview that was posted online Sunday night, Bannon was asked whether he considered Comey's dismissal -- which ignited a political firestorm and directly led to the appointment of a special counsel to investigate Russian meddling in the 2016 election, including potential ties to Trump's campaign -- the biggest mistake in political history.

Bannon responded, "That would be probably -- that probably would be too bombastic even for me, but maybe modern political history."

He went on to acknowledge that if Comey had not been let go, it's unlikely that the probe led by special counsel Robert Mueller would have been established.

If you're an adult male and someone invites you on 60 Minutes, is it a deliberate or accidental thing if you don't shave three days prior? And if there was ever a poster boy for what coke and meth can do to an overweight adult male, brother this is your spokesman.

What an interview like this fails to do is to really nail down what a cretin like Bannon really represents. He is a white nationalist, and all he sees is a country that is evolving differently than what he thinks it should. All he sees are groups that must be thrown out of the country or marginalized so that his view of America can be supreme to all others. The more hate he foments, the less human he becomes.

In other words, he is doomed to fail, and he doesn't care how unhealthy he looks or how crazy he sounds. He is rooting about like a feral dog, trying to find some bones he can steal. Do we know that Bannon isn't the guy with his legs hanging out of a dumpster behind the McCormick & Schmick's on K Street at three in the morning? This guy looks like he got a hold of some bad tartar sauce and a plastic bag full of expired shrimp.

Have you seen the videos where Bannon's jawbone is twitching like that of a starving jackal? Jesus, man. Get yourself in front of a physician, and soon.

What happened to “drain the swamp”? Bannon says it’s been “a successful business model” for politicians and will take years to undo pic.twitter.com/sW3z3cDl0a

Bannon clenching his jaw/grinding his teeth on 60 Minutes, just like the raging cokehead we all know he is. pic.twitter.com/TpkqM1Fx6D