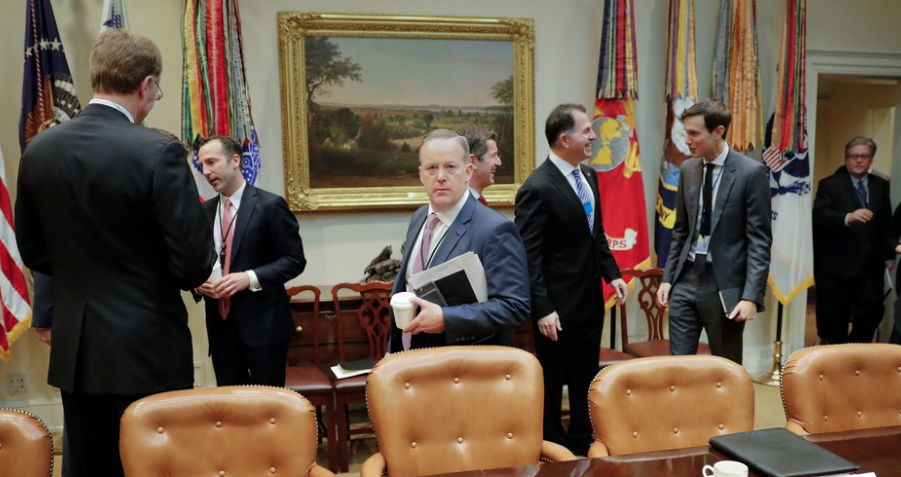 When you work for the Trump Family Crime Syndicate, you don't take exhaustive notes in meetings, you turd:

When Spicer worked at the RNC, he was said to have filled black books emblazoned with the party's seal. Spicer was so well-known for his copious notes that underlings joked about him writing a tell-all.

One source familiar with the matter said that the records were just to help him do his job.

"Sean documented everything," the source said.

That surprised some officials of previous White Houses, who said that because of past investigations, they intentionally took as few notes as possible when they worked in the West Wing.

When we texted Spicer for comment on his note-taking practices, he replied: "Mike, please stop texting/emailing me unsolicited anymore."

When I replied with a "?" (I have known Spicer and his wife for more than a dozen years), he answered: "Not sure what that means. From a legal standpoint I want to be clear: Do not email or text me again. Should you do again I will report to the appropriate authorities."

The WashPost reported Sept. 8 that Mueller "has alerted the White House that his team will probably seek to interview" Spicer and five other top current and former Trump advisers.

One White House official told me: "People are going to wish they'd been nicer to Sean. … He was in a lot of meetings."

Obstruction of justice much, you guys? Jeeeeeezus.

Stories like this do not help with the "normalization" of cast-aside Trump employees. The establishment media complex in Washington D.C. clearly wants to admit these people into the crowd because that's what sustains the population of insiders. If you have to exclude toads like Spicer, you're going to end up with an ever-dwindling number of people to share information and gossip with. Yes, it's fun to exclude people. But, really, the whole thing is incestuous and rotten to the core. Having someone like Spicer around elevates the status of a Bush or Obama staffer.

I mean, seriously. Who on Earth would want to be Sean Spicer right now? Especially since it is now widely known that he wrote everything down, every word of it, so that Robert Mueller's obstruction of justice indictments will have the full weight of documentation behind them?

Documentation that, ahem, the Trump Crime Syndicate has so far tried to avoid.