Paul Manafort is the Embodiment of the GOP Establishment 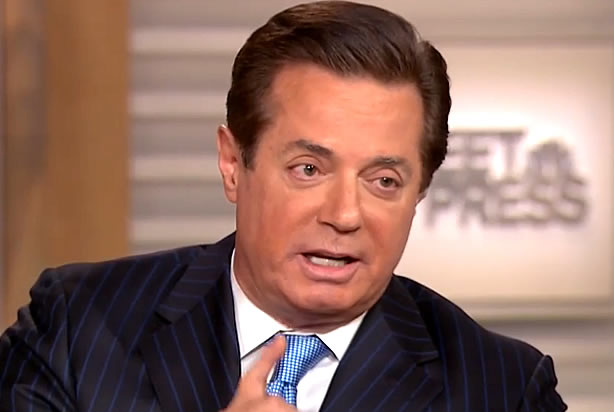 Paul Manafort was a scumbag long before anyone heard of him, and it's worth noting that as he begins to pull the Trump Regime down around him, he's never, ever going to stop being a thief and a traitor to this country:

US investigators wiretapped former Trump campaign chairman Paul Manafort under secret court orders before and after the election, sources tell CNN, an extraordinary step involving a high-ranking campaign official now at the center of the Russia meddling probe.

The government snooping continued into early this year, including a period when Manafort was known to talk to President Donald Trump.

Some of the intelligence collected includes communications that sparked concerns among investigators that Manafort had encouraged the Russians to help with the campaign, according to three sources familiar with the investigation. Two of these sources, however, cautioned that the evidence is not conclusive.

I cannot say this enough times--if Hillary Clinton's campaign manager did just one tenth of what Paul Manafort has done, this Republic would be paralyzed for a year, trying to sort out how fast they could impeach her and how far they could throw her under the jail. If you reverse this, Republicans would be tearing down the gates of the White House, beaten back by D.C.'s finest, a real Brooks Brothers riot if there ever was one. Garments would be rended, thoughtful Republican pundits would be apoplectic with horror and outrage, and I do believe Fox News would have to expand coverage onto nine separate 24-hour-a-day channels just to handle the entirety of the programming that would be organized to cover Hillary's campaign manager's no-knock-in-the-middle-of-the-night hootenanny with the Feds.

How is this not registering as a 25 on the Richter scale of government scandals? They're all but daring the Trump regime to react to this by firing Robert Mueller. They're all but telegraphing their move--Manafort is going to be flipped so he can reveal the full extent of the data analytics effort to steal the election for Trump with help from the Russians.

Manafort is going to be the nail in their coffin if Mike Flynn doesn't get himself a hammer and start trying to drive himself into that spot ahead of him. Don't forget the dozen or so other rats who now realize they aren't going to have a comfy chair to sit in when the music stops. Roger Stone is looking for a way to fake his own death that doesn't involve getting hit from behind by someone's leather chaps at the next swinger's party, lube optional.

Hooooooo-boy. The shit has hit the fan.

But let's not lose sight of something. Paul Manafort was not a Trump person to start with. Manafort wasn't a fringe staffer from the bowels of the GOP. Manafort was a Bushie, through and through. He was with the original crime family before he got swept up in this crime family. Manafort has worked his whole life in the cocoa-buttered ass crack of the Republican Party establishment, raking in the bucks, flattering the bosses, and churning out the graft. What's a little treason when there's five, ten, or fifteen million to be made hooking up people with your old friends in Russia?

Here's Mr. GOP Establishment admitting to Congress that he is, in fact, a filthy douchebag:

Hey, maybe next time check the second page of the resume, suckers.

Oh, and I just don't see Manafort being "loyal" to anyone that gets in the way of his money/freedom/me-time. I really don't. Something to ponder, I guess.