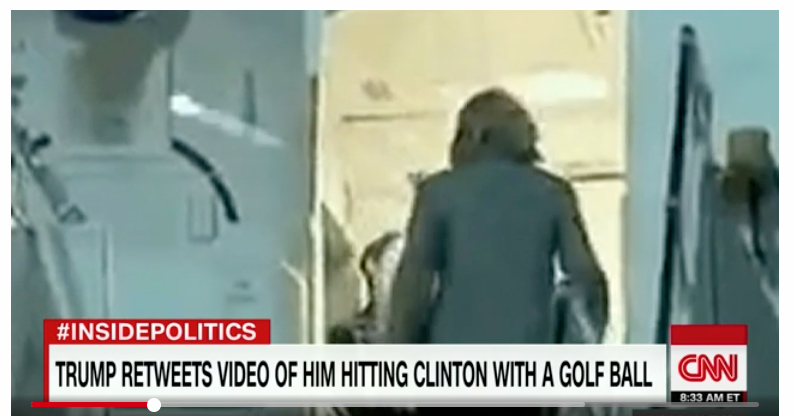 Trump re-tweeted a video where he hits a golf ball and then hits Hillary Clinton in the back, causing her to stumble. It's a poorly-edited joke, designed to show Trump in a position of power and dominance.

This is our new normal:

The animated GIF image Trump retweeted spliced together footage of Trump taking a swing on a golf course with footage of Clinton tripping and falling as she boarded a plane in 2011 as secretary of state. The footage is edited to make it appear as though Clinton is hit in the back with a golf ball before her fall.

In honor of Trump retweeting this, I present you with the hashtag: #CrookedDonald#AMJoy #ImpeachTrump https://t.co/nTqyUX4W8k

The tweet revealed a President still reverting to his old social media habits, namely, those likely to earn him quick criticism, less than two months after retired Gen. John Kelly took over as White House chief of staff.

While Kelly has not sought to stop Trump from tweeting, he has encouraged the President to allow him to vet the tweets before posting them -- a request Trump has sometimes acquiesced to.

The White House did not immediately respond to a request for comment Sunday about the President's tweet and whether Kelly was aware of it.

This goes back to the primaries and the general election of last year--Trump is not held accountable because there just aren't any decent Republicans in a position of power to put Trump in check and correct his behavior. So much for thinking Kelly could bring some semblance of order to things.

Whenever a Democrat does anything remotely similar, Republicans cry like whiny titty babies and demand firings/executions/incarcerations or worse. They hate political correctness unless they can turn it around and force someone to their knees. But this goes beyond all that.

No one should be Tweeting or Retweeting that kind of stuff. It normalizes violence against political opponents; it cheapens discourse and allows others to escalate their rhetoric to unheard of levels of vitriol and hatred. If you normalize the physical destruction of your opponent, you're opening the door for one of your supporters to do something horrible. That's how Putin controls Russia--he has people beaten up or killed. That's what Trump would like to do--assume the mantle of a new strongman in America and terrorize and eliminate the liberals and the people who oppose him. This is fundamentally un-American and wrong on so many levels, it isn't even funny. Ever since the election, Trump's supporters are committing violent acts of hate. They're openly marching in the streets of American cities with Nazi banners and assault weapons.

There should be no tolerance for this. I don't want to hear how people condemn this and are unhappy with it. I want to know what they're going to do about it. I want to see a plan of action to check the power of this president and put the country back on a path to where there really is oversight of the Executive Branch. Don't pee on everyone's leg and tell them it's raining. Do the right fucking thing.

Everything Trump is doing right now is destroying what used to be the United States of America. Everyone letting him do that is complicit in a crime against the Republic. No, they aren't going to wake up tomorrow and start impeaching Trump, but they should.