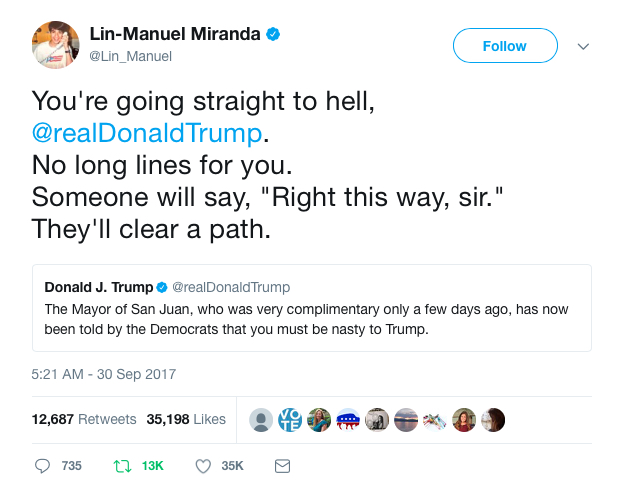 This is the state of American political and social discourse right now.

Years from now, when we are still horrified and talking about the terrible things that Trump said on Twitter, his response to the suffering in Puerto Rico probably won't even make a top 50 list of all the horrible things that he has said to people who are suffering.

Everything Trump does is free of real accountability and actual consequence. He is enabled by people for whom all of this is reprehensible and horrible in public but, in private, they're all fine with this. They're fine with this because a racist cabal of traitors won a close election. They know they are where they are temporarily, and they know the institutions of the United States of America will prevent ordinary citizens from pulling them out of their chauffeured cars and tearing them into pieces. They know they can ride this out for another 3.25 years and steal whatever they want and get away with it. We, as a people, should trust in the fact that if the Republicans are ever put in charge of anything ever again, they will not do the right thing and they will not act in the interests of the country.

Meanwhile, people are suffering and dying. This is a remarkable test of democracy, isn't it?