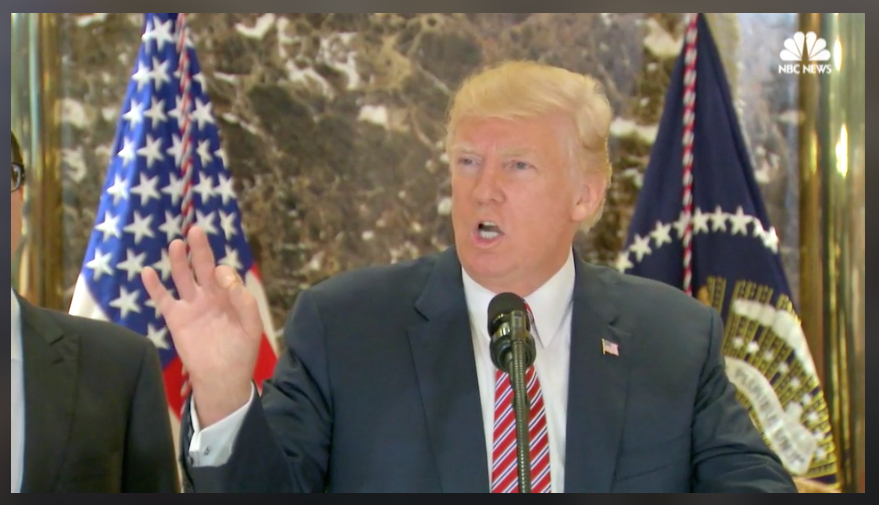 When Trump makes this sign with his hand, he is signaling to his devoted followers that he believes in "white power."

Today, he made that sign and spoke as if it was somehow un-American to protest against Nazis in an American city:

President Donald Trump, in a staggering, impromptu news conference in New York on Tuesday, blamed the violence in Charlottesville, Virginia, over the weekend on both sides of the conflict -- equating the white supremacists on one side with the "alt-left" on the other side -- after his top White House aides spent days trying to clean up after Trump's initial vague response to the violence.

The news conference laid bare his unvarnished view of who was to blame for the violence and what he thinks about the nationwide effort to remove statues of Confederate leaders. Trump's comments were the latest in what has been a jaw-dropping saga ever since the President made his first vague statement on the violence, blaming the conflicts on "many sides." The comments also made clear that Trump's speech on Monday -- which vociferously blamed the violence on the "alt-right" and neo-Nazi groups who initiated the protest -- was largely a sterilized version of his view.

"I think there is blame on both sides," Trump said during a contentious back-and-forth with reporters in the lobby of his Midtown Manhattan building.

This was the worst day (so far!) in American presidential politics. It was a day where decency, honor, and courage took the day off. It was horrible.

The white power movement has a friend in Donald Trump. The American people don't have a president. And this country has not seen the end of this nightmare.