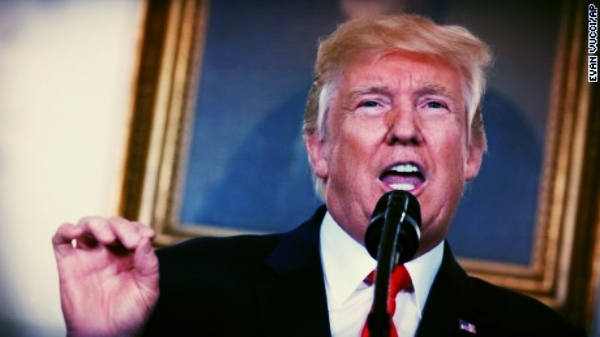 The central organizing principle of the Democratic Party should be associating Trump with the GOP until both are driven from power:

"The personal disgust for Trump within the Senate is really remarkable," a top GOP strategist told me last week.

Now the president's refusal to condemn the "Unite the Right" gathering in Charlottesville, Virginia, which included the former Klan leader Duke, has begun pulling private disdain into the open.

The more obscure the president's actions, the likelier Republican leaders have been to remain quiet for fear of antagonizing his core supporters. But on Saturday, a Dodge Charger plowed into a group of people who were counter-protesting at that gathering of hundreds of white nationalists. One person died and more than a dozen were injured. The president's response blamed "many sides."

The graphic, deadly events this weekend, and the president's response to them, threaten his party with the broader electorate that grows more diverse and more tolerant with every passing year.

In addressing the attack, Trump cast white supremacists and neo-Nazis carrying torches onto the University of Virginia campus as morally equivalent to counter-protesters advocating racial equality. His stance — a purposeful choice by a president who relishes singling out so many others for criticism — places him at odds with the values of the nation he was elected to serve.

That raises risks for elected officials who stand with Trump at a moment of legal, as well as political, jeopardy. It further complicates prospects for the Republican agenda on tax cuts, health care and other issues. It increases the possibility that Trump's presidency itself will be cut short.

The agenda of the GOP controlled Congress is a non-starter for every decent American. This Congress and the president are one and the same. They had a chance to disavow Trump and they punted. The rich don't need more money. Everyone deserves healthcare. And paying people a living wage ought to be the rallying cry. Never, ever let the voters forget that saying 'fuck it' and voting for Trump means chaos, hatred, and fear.