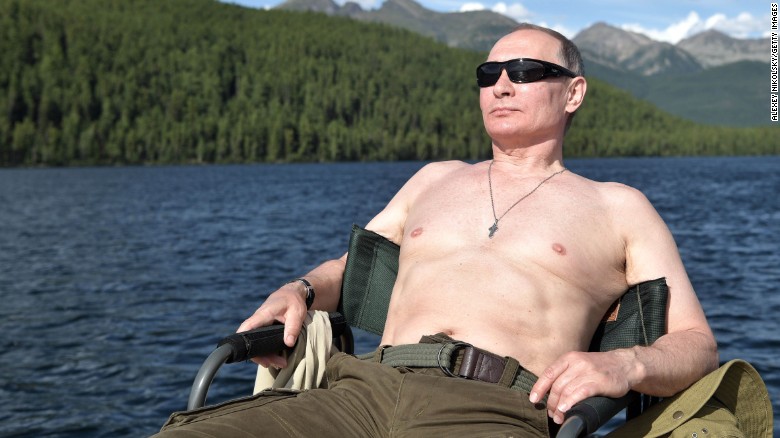 This is a grotesque image of totalitarianism. It is a display of vanity and power. Everything about Putin has a homoerotic undertone to it, right down to the low, dangling cross that rests on his sternum. The people who use Photoshop to satirize and demean the Russian government are going to have a field day with these photos of Vladimir Putin on vacation.

Your average American probably doesn't get what this about. Everyone in the Baltic countries, everyone in Ukraine, and everyone under the heel of Russia's security forces know what this image represents. People in Poland know what it means. The rest of Europe shudders.

I think we should all consider the timing of this release of propaganda images, which coincides with Trump's decision to spend 17 days doing what he does every day--nothing of substance, nothing healthy, and nothing that preserves, protects or defends the interests of the American people. This is Putin saying something very clear and direct to the world--I have won, I am in control, and I am relaxing because, in the days ahead, I am coming for all of you.

The contrast couldn't be more stark. Putin is a "man's man" doing manly things while Trump hides on one of his many golf courses, playing an effete game for elite white men and wearing clothes that cannot conceal his ample gut and his soft body. The reason why you're seeing these photos is because the Russians want to show how different their leader is from the American leader. They were raised with images of Reagan on horseback, Bush in his powerboat, Clinton on Martha's Vineyard, Bush II on his ranch clearing brush, and Obama in his swim suit. They are loving the contrast with Trump right now. Humiliating America is Russia's new favorite game show.