Tear Down This Statue 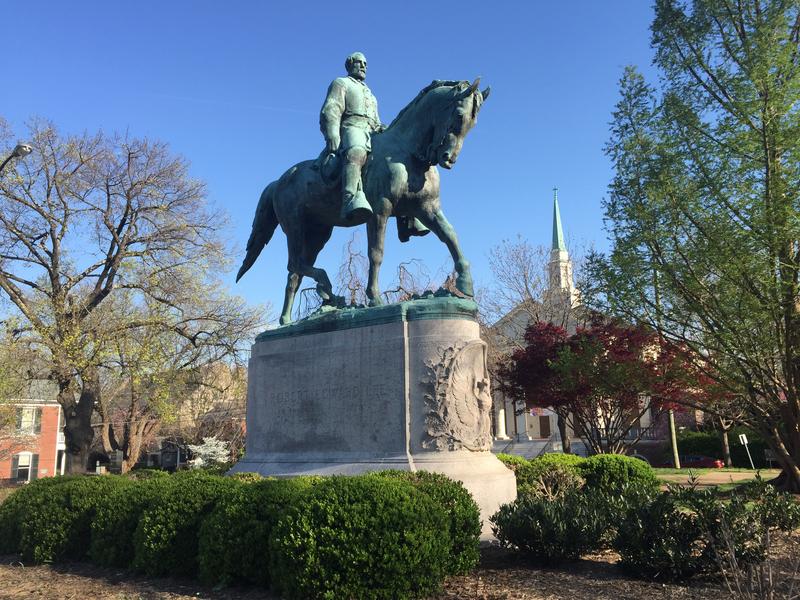 The United States of America exists because this man was defeated in battle. General Robert E. Lee was a lot of things, but the defining moment of his life was when he decided that his loyalty belonged to the State of Virginia and not the United States. He led men in battle to destroy the country we live in today so that a relatively small group of wealthy white men could continue to own slaves. Many of the men who died in battle on his behalf did so without ever owning another human being. Lee lived out his final years trying to convince young men to abandon the "lost cause" and educate themselves in fields like engineering and mathematics so that they could rebuild what the war had destroyed.

Building monuments to him serves a single purpose--to remind African-Americans that this man is revered because he almost defeated the Army of the Potomac and crushed the government of the United States. He is a symbol of white supremacy and his statues and monuments should be treated as such and taken down. But, more importantly, the police in Charlottesville, Virginia decided that they were going to stand by and do as little as possible while mayhem broke out in their city:

There was nothing haphazard about the violence that erupted today in this bucolic town in Virginia’s heartland. At about 10 a.m. today, at one of countless such confrontations, an angry mob of white supremacists formed a battle line across from a group of counter-protesters, many of them older and gray-haired, who had gathered near a church parking lot. On command from their leader, the young men charged and pummeled their ideological foes with abandon. One woman was hurled to the pavement, and the blood from her bruised head was instantly visible.

A.C. Thompson is covering the rise in hate crimes in America as part of our Documenting Hateproject. If you've witnessed or been the victim of a hate crime or bias incident — in Charlottesville or elsewhere — tell us your story.

Standing nearby, an assortment of Virginia State Police troopers and Charlottesville police wearing protective gear watched silently from behind an array of metal barricades — and did nothing.

It was a scene that played out over and over in Charlottesville as law enforcement confronted the largest public gathering of white supremacists in decades. We walked the streets beginning in the early morning hours and repeatedly witnessed instances in which authorities took a largely laissez faire approach, allowing white supremacists and counter-protesters to physically battle.

Officials in Charlottesville had publicly promised to maintain control of the “Unite the Right” rally, which is the latest in a series of chaotic and bloody racist rallies that have roiled this college town, a place deeply proud of its links to Thomas Jefferson and the origins of American Democracy.

But the white supremacists who flooded into the city’s Emancipation Park — a statue of Confederate General Robert E. Lee sits in the center of the park — had spent months openly planning for war. The Daily Stormer, a popular neo-Nazi website, encouraged rally attendees to bring shields, pepper spray, and fascist flags and flagpoles. A prominent racist podcast told its listeners to come carrying guns. “Bring whatever you need, that you feel you need for your self defense. Do what you need to do for security of your own person,” said Mike “Enoch” Peinovich on The Right Stuff podcast.

I can assure you--control was not maintained. The police were not in control of anything on Saturday, August 12. So, if the symbol of defiance against public decency is allowed to remain standing, the racists and the bigots and the Nazis will come back and hold more demonstrations. They will march with their long rifles and terrorize decent, law-abiding Americans. This cannot be allowed. We cannot allow this in our country.

There are precious few monuments to Northern generals. But the celebration of treason is unique to the American experience. We love us some Confederate ghosts. How long are we going to keep up this charade?

As of August 2016, there were still more than 1,500 public commemorations of the Confederacy, even excluding the battlefields and cemeteries: 718 monuments and statutes still stood, and 109 public schools, 80 counties and cities, and 10 U.S. military bases bore the names of Lee, Jefferson Davis, and other Confederate icons, according to a tally by the Southern Poverty Law Center. More than 200 of these were in Virginia alone.

And one sits in the center of Charlottesville. It was commissioned exactly 100 years ago, a gift to the city from a local philanthropist, to honor his parents with a physical incarnation of Southern ideals. But the statue was hardly the only contemporary effort to enshrine and defend these ideals. As it was being commissioned, sculpted, and erected, the second Ku Klux Klan was surging through the country. In Charlottesville, the local Klan gave $1,000 to the University of Virginia’s Centennial Endowment Fund in 1921, funds it gratefully received; there was a second Klan chapter for the students on campus.

The statue stands 26-feet tall, despite its oddly small pedestal. “Let it stay that way,” urged a speaker at its dedication. “The planet as a pedestal would be too small for Robert Edward Lee.” It was unveiled in 1924, as the conventions of the Confederate Veterans and Sons of Confederate Veterans met, with “the greatest procession that ever threaded its way through the streets of Charlottesville.” The Boy Scouts policed the route; the National Guard and governor marched; the president, board, faculty, and students of the university joined in. The man who introduced the ceremonies praised the “deathless devotion” of the veterans, who had fought “at Chancellorsville and Gettysburg,” and now worked “to keep the record of Confederate heroism free from the stain of calumny!”

It was less a dedication than a canonization. The master of ceremonies called Lee “the greatest man who ever lived.” The president of Washington and Lee proclaimed him “a Christian saint.” Lee, he explained, embodied “the moral greatness of the Old South,” with its “unusual combination of manly courage and womanly tenderness, its habitual tenderness toward the weak and helpless.” (When three slaves escaped, Lee had them tied to posts and whipped—50 lashes for the men, 20 for the woman—and then had their backs washed with stinging brine.)

His defenders today insist that Lee’s heroism lay not least in his laying down his sword when the war was done, deciding to “promote harmony once he recognized defeat.” The speakers at the dedication likewise stressed Lee’s role as a peacemaker; one went so far as to imagine the statute depicted “not the lurid splendor of the battlefield,” but instead, Lee riding to Lexington to begin his tenure as a university president.

Yet this is not what the statue depicts. Not this one, nor the others. Where are the statues of Lee seated at Appomattox, signing the terms of that surrender? Where are the marbles and bronzes of Lee the college president, wearing civilian clothes, ensconced behind a desk piled high with paperwork? Why is this peacemaker always immortalized girded for war?

His defenders of today showed their true colors. How can we tolerate this in a democratic society? How can we stand by and do nothing? How can we allow the forces of the alt-right, white nationalism, and the racism encouraged by the Trump Regime to continue to inspire more heavily-armed young men to travel across state lines and kill, maim, injure and terrorize American citizens?