Steve Bannon Keeps Telling Us Who He Is 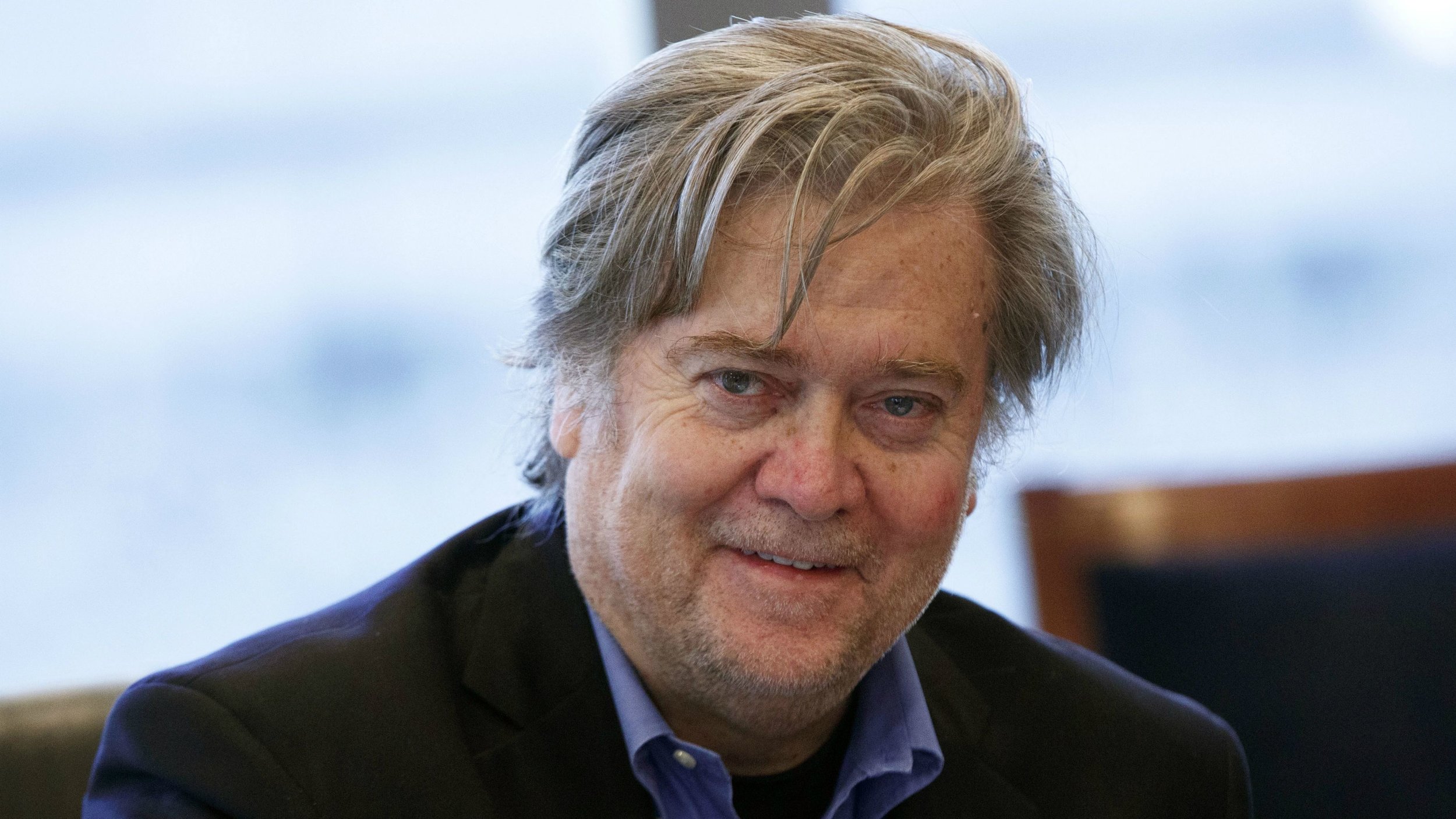 How did this wonderful gem of an article disappear from the Internet? The American Prospect took it down, but the Internet is forever. Here's Steve Bannon telling the world who he is for about the hundredth time. No link because fuck that shit:

You might think from recent press accounts that Steve Bannon is on the ropes and therefore behaving prudently. In the aftermath of events in Charlottesville, he is widely blamed for his boss’s continuing indulgence of white supremacists. Allies of National Security Adviser H.R. McMaster hold Bannon responsible for a campaign by Breitbart News, which Bannon once led, to vilify the security chief. Trump’s defense of Bannon, at his Tuesday press conference, was tepid.

But Bannon was in high spirits when he phoned me Tuesday afternoon to discuss the politics of taking a harder line with China, and minced no words describing his efforts to neutralize his rivals at the Departments of Defense, State, and Treasury. “They’re wetting themselves,” he said, proceeding to detail how he would oust some of his opponents at State and Defense.

Needless to say, I was a little stunned to get an email from Bannon’s assistant midday Tuesday, just as all hell was breaking loose once again about Charlottesville, saying that Bannon wished to meet with me.

Needless to say, I was a little stunned to get an email from Bannon’s assistant midday Tuesday, just as all hell was breaking loose once again about Charlottesville, saying that Bannon wished to meet with me. I’d just published a column on how China was profiting from the U.S.-North Korea nuclear brinkmanship, and it included some choice words about Bannon’s boss.

“In Kim, Trump has met his match,” I wrote. “The risk of two arrogant fools blundering into a nuclear exchange is more serious than at any time since October 1962.” Maybe Bannon wanted to scream at me?

I told the assistant that I was on vacation, but I would be happy to speak by phone. Bannon promptly called.

Far from dressing me down for comparing Trump to Kim, he began, “It’s a great honor to finally track you down. I’ve followed your writing for years and I think you and I are in same boat when it comes to China.  You absolutely nailed it.”

“We’re at economic war with China,” he added. “It’s in all their literature. They’re not shy about saying what they’re doing. One of us is going to be a hegemon in 25 or 30 years and it’s gonna be them if we go down this path. On Korea, they’re just tapping us along. It’s just a sideshow.”

Bannon said he might consider a deal in which China got North Korea to freeze its nuclear buildup with verifiable inspections and the United States removed its troops from the peninsula, but such a deal seemed remote. Given that China is not likely to do much more on North Korea, and that the logic of mutually assured destruction was its own source of restraint, Bannon saw no reason not to proceed with tough trade sanctions against China.

Contrary to Trump’s threat of fire and fury, Bannon said: “There’s no military solution [to North Korea’s nuclear threats], forget it. Until somebody solves the part of the equation that shows me that ten million people in Seoul don’t die in the first 30 minutes from conventional weapons, I don’t know what you’re talking about, there’s no military solution here, they got us.” Bannon went on to describe his battle inside the administration to take a harder line on China trade, and not to fall into a trap of wishful thinking in which complaints against China’s trade practices now had to take a backseat to the hope that China, as honest broker, would help restrain Kim.

“To me,” Bannon said, “the economic war with China is everything. And we have to be maniacally focused on that. If we continue to lose it, we're five years away, I think, ten years at the most, of hitting an inflection point from which we'll never be able to recover.”

Bannon’s plan of attack includes: a complaint under Section 301 of the 1974 Trade Act against Chinese coercion of technology transfers from American corporations doing business there, and follow-up complaints against steel and aluminum dumping. “We’re going to run the tables on these guys. We’ve come to the conclusion that they’re in an economic war and they’re crushing us.”

But what about his internal adversaries, at the departments of State and Defense, who think the United States can enlist Beijing’s aid on the North Korean standoff, and at Treasury and the National Economic Council who don’t want to mess with the trading system?

“Oh, they’re wetting themselves,” he said, explaining that the Section 301 complaint, which was put on hold when the war of threats with North Korea broke out, was shelved only temporarily, and will be revived in three weeks. As for other cabinet departments, Bannon has big plans to marginalize their influence.

“I’m changing out people at East Asian Defense; I’m getting hawks in. I’m getting Susan Thornton [acting head of East Asian and Pacific Affairs] out at State.”

But can Bannon really win that fight internally?

“We gotta do this. The president’s default position is to do it, but the apparatus is going crazy. Don’t get me wrong. It’s like, every day.”

Bannon explained that his strategy is to battle the trade doves inside the administration while building an outside coalition of trade hawks that includes left as well as right. Hence the phone call to me.

There are a couple of things that are startling about this premise. First, to the extent that most of the opponents of Bannon’s China trade strategy are other Trump administration officials, it’s not clear how reaching out to the left helps him. If anything, it gives his adversaries ammunition to characterize Bannon as unreliable or disloyal.

More puzzling is the fact that Bannon would phone a writer and editor of a progressive publication (the cover lines on whose first two issues after Trump’s election were “Resisting Trump” and “Containing Trump”) and assume that a possible convergence of views on China trade might somehow paper over the political and moral chasm on white nationalism.

The question of whether the phone call was on or off the record never came up. This is also puzzling, since Steve Bannon is not exactly Bambi when it comes to dealing with the press. He’s probably the most media-savvy person in America.

He dismissed the far right as irrelevant and sidestepped his own role in cultivating it: “Ethno-nationalism—it's losers. It's a fringe element. I think the media plays it up too much, and we gotta help crush it, you know, uh, help crush it more.”

“These guys are a collection of clowns,” he added.

From his lips to Trump’s ear.

“The Democrats,” he said, “the longer they talk about identity politics, I got ’em. I want them to talk about racism every day. If the left is focused on race and identity, and we go with economic nationalism, we can crush the Democrats.”

I had never before spoken with Bannon. I came away from the conversation with a sense both of his savvy and his recklessness. The waters around him are rising, but he is going about his business of infighting, and attempting to cultivate improbable outside allies, to promote his China strategy. His enemies will do what they do.

Either the reports of the threats to Bannon’s job are grossly exaggerated and leaked by his rivals, or he has decided not to change his routine and to go down fighting. Given Trump’s impulsivity, neither Bannon nor Trump really has any idea from day to day whether Bannon is staying or going. He has survived earlier threats. So what the hell, damn the torpedoes.

The conversation ended with Bannon inviting me to the White House after Labor Day to continue the discussion of China and trade. We’ll see if he’s still there.

Well, it's almost Labor Day. How much do you want to bet Bannon is still there?