I Knew They Were Going to Go After Lincoln 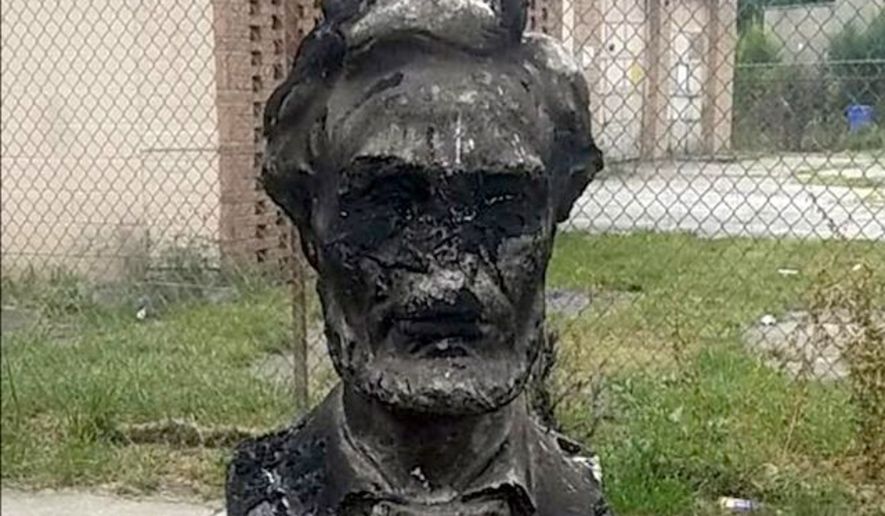 This is a statue of Abraham Lincoln in Chicago, Illinois. Someone burned it because that's what we do now in this country--we take the president's ridiculous public statements and watch people over-react to them and commit horrible crimes against decency:

Abraham Lincoln has joined George Washington on the list of those targeted by Chicagoans in a national debate over Civil War-era monuments.

Alderman Raymond Lopez took to Facebook Wednesday night to decry a defaced statue of the nation’s 16th president in the Englewood neighborhood. The giant bust appears to have been damaged after someone in the 15th Ward sprayed and ignited a flammable liquid.

“What an absolute disgraceful act of vandalism. This bust of Abraham Lincoln, erected by Phil Bloomquist on August 31, 1926, was damaged & burned,” Mr. Lopez wrote, a local NBC affiliate reported. “If anyone has any information regarding this act, please contact the police or my office immediately.”

“F- Abe Lincoln,” responded Quintin Mitchell, whose comment was “liked” or deemed “funny” by 160 others.

Let me just point out that Chicago sent people and material to fight the Civil War, but no major battles were fought there. That must explain why the Lincoln statue is sitting in what looks to be an abandoned lot behind a Pep Boys. In any case, I can't wait to hear Trump's statement on this act of domestic terrorism. He already knows a lot about Lincoln, you know:

Well, I think Lincoln succeeded for numerous reasons. He was a man who was of great intelligence, which most presidents would be. But he was a man of great intelligence, but he was also a man who did something that was a very vital thing to do at that time. Ten years before or 20 years before, what he was doing would never have even been thought possible. So he did something that was a very important thing to do, and especially at that time. And Nixon failed, I think to a certain extent, because of his personality. You know? It was just that personality. Very severe, very exclusive. In other words, people couldn’t come in. And people didn’t like him. I mean, people didn’t like him.