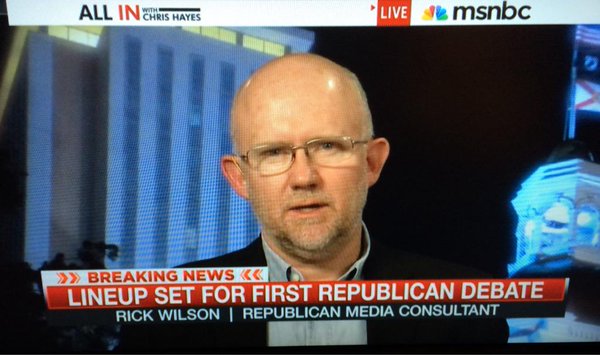 Republican strategist Rick Wilson puts his country ahead of his party. I will grant that concession because this is not a post about bashing him for being temporarily sane.

There's a danger in thinking that there are a lot of people like Wilson scattered throughout the Republican Party who are, all of a sudden, going to put country ahead of their political ideology. This assumes too many facts not in evidence. Republicans vote for Republicans and that's why we have Trump. This past year, they didn't stay home like they did in 2012. They turned out in strong enough numbers to keep Hillary out of the White House.

1. The so-called "sane Republicans" are the ones without power or influence so why bother listening to them?

2. No matter who the Democrats pick to run in 2020, they will be History's Greatest Monster and people like Rick Wilson will go back to being Republicans and attack them in any manner they see fit.

3. Why on Earth is anyone listening to a Republican nowadays? They gave us Trump. Fuck them.

Anyway, Wilson seems to be trying to normalize having generals in charge of things:

There was a palpable sigh of relief when General John Kelly was selected as White House chief of staff and when National Security Adviser H.R. McMaster finally began purging the nationalist Pepe-fanboy Bannonites from the NSC. Combined with the presence of SECDEF Jim Mattis, Nikki Haley’s star turn at the UN, and a more assertive Rex Tillerson, there was almost a sense that the Axis of Adults would help mitigate the crazy.  When news broke that North Korea was close to mounting a miniaturized warhead on an ICBM capable of reaching U.S. territory, there was a hope that the experienced military team around Trump would turn this crisis into a foreign policy win.

Then came “fire and fury.”

It is dangerous to think that three generals are the perfect antidote to institutionalized chaos. We are close to abandoning the idea of civilian control of the military because of the fact that Trump isn't interested in learning how to do his job. And I am very leery of any Republican strategist trying to set it up so that, years from now, we are forced to run against one of these three generals as the GOP's presidential candidate. The mere act of serving in an appointed position in the Trump cabinet should disqualify each and every one of the people who are there now from serving in any capacity anywhere in the public sector for the next fifty years or more.

I think the general consensus is that Trump didn't all of a sudden do something that made him unfit for the presidency when he used that phrase. He was unfit from day one, and far too few Republicans put country ahead of party. In overwhelming numbers, they voted against their economic self-interest. They voted for a con man. They voted for a man who has broken so many laws, he came into power with more attorneys in his employ than any president we've ever had. They voted for him knowing full well that he was never, ever going to act presidential. A certain Democrat named Hillary told you this again and again but all y'all could come up with was "but her E-mails!" and "Benghazi!"

The other dumb mistake pundits are making is thinking Chief of Staff John Kelly is his own man. He's not. He's only the latest sycophant to sell out his country and work for Trump. Plenty of other generals said no to this shit-sandwich and voted with their feet. Mattis, Kelly and McMaster have sold out their country in order to pretend they can run things. They amount to little more than a tin-pot junta without the slightest idea of what to do when the economy craters or when a reporter asks them a straight question. This country was never intended to be run by generals. It was meant to be run by the occasional general who knew when it was time to hang up the stars and deal with a world full of compromises and negotiations.

I truly believe we have abandoned democracy and the rule of law. This junta is what we have in its place. If the law says Trump is guilty of collusion with Russia, will the Republicans rediscover the notion of having an actual loyal American in charge? Or will they shrug like they do every day right now and go about the business of ignoring the fact that the President of the United States is under an active counterintelligence investigation by the Federal Bureau of Investigation? I can tell you with absolute certainty that if any Democrat sitting in the White House had just had the home of his presidential campaign manager raided at zero dark thirty by the FBI, they would pull down the fences and run him or her out of town on a rail, rule of law be damned.

And what the fuck is all of this anyway? Generals are good at telling people what to do. They do not handle things very well when creative civilians come up with ways to not do what they've been told. The Mattis/Kelly/McMaster junta has been outclassed by a disheveled hobo who used to deal in conspiracy theories. McMaster's so-called purge means what? Nothing. Bannon is still Bannon. Who's running things? Trump is running things based on chaos and what they tell him on Fox & Friends. This is not a recipe for success. This is what it's like when people start thinking there's a reasonable Republican hiding in the fifth slot in front of Anderson Cooper.

I put no faith in anti-Trump Republicans. They're just working the edges, looking for suckers who will buy what they're selling. Once this fever passes, they're going to go back to doing what they know how to do, and that's undermine everything decent about this country. I'm sorry, but I was awake and paying attention to the Reagan years. I'm never trusting these bastards, ever.

I like Rick, and I think he's entertaining as hell. I like Steve Schmidt, and I have a certain fondness for the whimsical Republicanism of old Arne Carlson, the former governor of Minnesota. But, no. I don't sit around waiting for any of them to come with something that's going to make me forget that the only thing standing between us and oblivion are a handful of weatherbeaten Democrats who take way too much shit from people who ought to grow up.