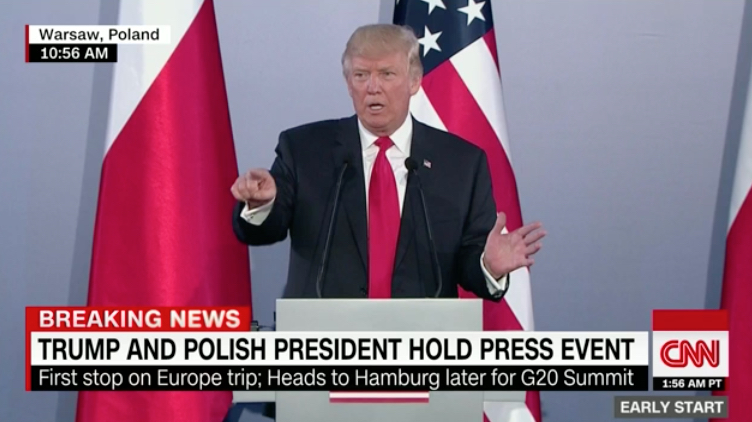 If there's a single issue that can unite us as a people, it would be disgust with Donald Trump and his insistence on defending Russia from criticism for interfering in our election:

President Donald Trump said Thursday that he thinks Russia was behind 2016 election meddling, but added that he feels "it could have been other people in other countries" and that "no one really knows for sure."

"I think it very well could be Russia but I think it could very well have been other countries," Trump said during a news conference with Polish President Andrzej Duda in which he also slammed the news media, including CNN and NBC. "I think a lot of people interfere."

Trump, asked about the fact the United States intelligence community has said it was Russia, compared that assessment to the eventually debunked claim that Iraq had weapons of mass destruction in the lead-up to the Iraq War.

Yeah, we pretty fucking much know for sure, but don't let that stop you from going overseas and accomplishing two things.

One, the president has been compromised and cannot bring himself to criticize Russia.

Two, the Republicans believe in party over all else and won't do anything about it.

This is where we are, folks. The Russians are more important to Trump than any American and that's how it's going to be until the remedy of the ballot box is implemented. If Robert Mueller brings back charges and proof of treason, so what? The Republicans in Congress will sit on their hands and betray America. There are no reasonable Republicans, only the ones who are harder to buy off with money and promises. The only thing that works is the voting booth, and we had better start fixing the structural problems in the Democratic Party right now. We had better figure out how to overcome voter suppression and disenfranchisement with all legal means.

Now is the time, now is when we must start. This is all we have left.