Trump's Mouthpiece Does Not Know the Law 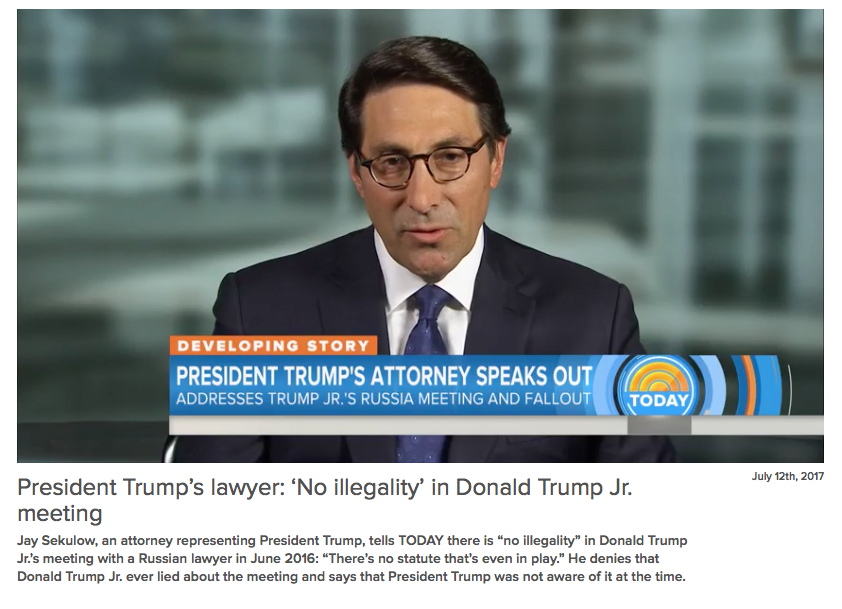 This is one of the more hilarious attempts to say that Donald Trump Jr. didn't break any "statutes." Jay Sekulow will probably be the first lawyer fired by the president before the month is out because of this inane defense.

Donald Trump Jr. admitted yesterday that he asked a foreign government to deliver damaging information about a political candidate on behalf of his own father. He met with a Russian government-affiliate lawyer with Jared Kushner and Paul Manafort. They sought an in-kind contribution from a foreign power--that's the law that was broken. His brother-in-law violated the laws regarding the application for a security clearance by not reporting this attempt to obtain information from a hostile foreign power. They committed treason while in support of a man running for president.

You can also go with what Norm Eisen and Richard Painter have to say here. We are early in this process. The official investigation by former FBI Director Robert Mueller is in its infancy. I believe he will eventually bring a number of charges against at least 50-75 different individuals, similar to what happened during Watergate. It could be worse than that, but that's what I think will happen. Trump will be impeached for obstruction of justice.

If I had to make three cheap predictions this is what I would go with:

1. Robert Mueller could be fired soon in order to throw more sand in the gears and delay impeachment. The Republicans do not scare Trump. They are useless collaborators.

2. Jared Kushner will resign or have his security clearance taken away. His divorce from Ivanka will be forthcoming.

3. Russia will release damaging information on Trump in retaliation for failing to deliver their diplomatic properties and an easing of sanctions. This will take the form of recorded kompramat from the Miss Universe Pageant era.

Oh, and someone will probably shoot themselves, and soon. My money is on whoever Trump decides will be the fall guy.

The happiest fella on Earth? Michael Flynn, because no one is talking about him this week.