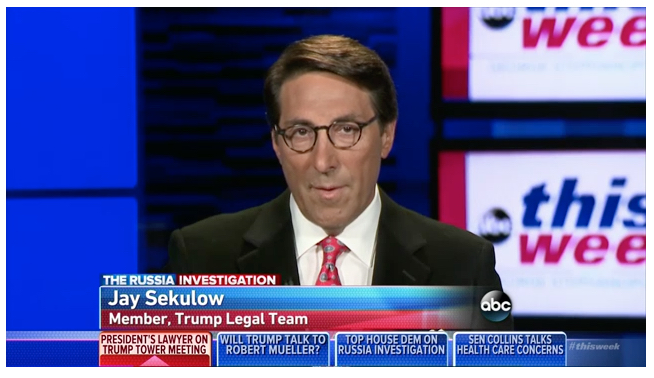 Trump's half-assed legal team continues to unravel before our eyes:

President Trump’s outside attorney Jay Sekulow said Sunday that the meeting between the president’s son and a Russian lawyer during the presidential campaign would not have happened if the Secret Service considered it “nefarious.”

“If this was nefarious, why'd the Secret Service allow these people in?” Sekulow asked on ABC’s “This Week.”

But Sekulow suggested the Russians who attended the meeting in Trump Tower with Donald Trump Jr. and other Trump campaign officials were vetted.

"The president had Secret Service protection at that point," he said. "That raised a question with me."

This statement allows us to unpack quite a few things. First, as many people have noted, it's not the job of the Secret Service to babysit the Trump children but that's exactly what they're being forced to do--one trip to Aspen required as many as a 100 agents. Second, they examine threats of a physical nature, not of a political nature. Third, Sekulow has delivered his boss even further into the hands of investigators.

By that I mean, Sekulow has now made it plain that we should find out if the Secret Service was keeping track of every single visitor Trump received in person; this could help determine whether or not Trump himself attended the meeting where Donald Jr. was given damaging information on the Hillary Clinton campaign in the presence of Russian intelligence officers and a lawyer connected with Russia's top prosecutor. Robert Mueller's investigative team can now take statements from the Secret Service detail assigned to Trump and find out where he went, who he saw, and what they know about his activities.

Do you think a Secret Service agent is going to lie under oath? We know that people who work privately for Trump lie all the time, but the Secret Service is now in a position to reveal a number of Trump family secrets now that they've been protecting him for over a year.

Oh, and let's not forget that Trump never fully trusted the Secret Service and, to this day, employs his own "loyal" people to protect him, which undermines their efforts even more.

In an article written by UCLA law professor, Jon D Michaels, that was published by CNN, Michaels wrote that with 'Trump's anti-government rhetoric, and his apparent comfort with commingling state and commercial power the last thing we need is a Blackwater on the Potomac'.

'His message is clear: We should not trust the feds,' Michaels added.

Trump's refusal to stop using his own private guards while in office could raise some legal issues.

Every time a Trump lawyer speaks, everything turns to shit fast.

UPDATE: The Secret Service works on Sundays, especially when it comes to debunking ridiculous bullshit.