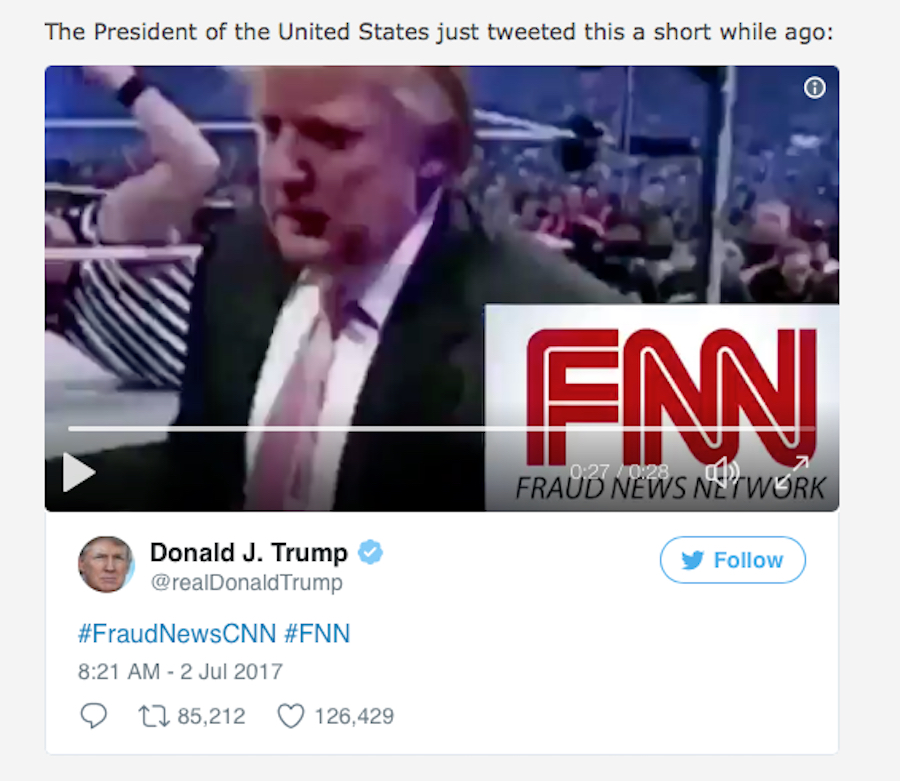 This is a still image from a video that Trump tweeted out this morning. Someone clumsily replaced the "head" of someone with the CNN logo. This is an old wrestling show appearance where Trump "fights" Vince McMahon and defeats him or humiliates him (humiliates himself, really, just by agreeing to appear). It's just sickening what his mind produces right now. This is what the president is doing on a Sunday morning?

Hey, why the hell aren't you on your way to church? Thanks again, conservative Christians. You picked a real winner this time. By the way, click the link to see the video. I'm not embedding it here.

In the comically inept video, you see Trump sucker-punch someone and then whale on them when they fall to the ground. This is exactly what a bully or a coward would do. This is how someone who thinks they're tough fights another person. This is the most Trumpian move Trump could possibly make--attack someone vulnerable, damage them as much as possible, and walk away without a hair out of place.

If the president of the United States is actually going to go to war with CNN, then the rest of the media should finally wake up to the fact that they helped elect a madman. CNN ran Trump's rallies all throughout the Spring and Summer of 2016 and they should do some deep soul searching before they embark on a public service endeavor along with the rest of the media. You see, it is now in the service of the interests of the public that they should start working. They should abandon their need for ratings and just do the public a favor and start fighting back against this madness. They should expect to be regulated out of business anyway if the Republicans hold on to Congress past 2018. They should expect to be out of business when Trump finally figures out how to turn the regulatory powers of the Executive Branch against their corporations.

Is a president who can blackmail television hosts going to stop? No.

Is a president with control over the FCC going to balk when they figure out how to run these people off the air? Nope.

Is a president who controls the IRS going to go after them with all the tools necessary to litigate these companies out of business? You're damned right he is.

Trump has floated several trial balloons. One, do away with the First Amendment. Two, make it easier for himself to sue media companies for slander. Three, he's even floated the idea of having people at his rallies attack the press physically. I mean, what more do you need?

Every large media company in America should stand up an investigative unit designed to break down everything into a digestible form. They should look at everything his regime does; they should look at every Trump family business deal and inform the public what it all means. They should start looking into every single relationship Trump has with not only Russia but other dictatorship countries as well. In other words, do your jobs and present the facts to the American people. Every. Single. Fucking. Day.

The video is juvenile to say the least. But this is a man with a juvenile mind and a deep desire for any form of revenge, no matter how badly it taints him with the stench of failure and desperation. This guy is flop sweat personified. The country is burning down all around us because this man cannot handle any perceived slight. No one controls his urges, no one can advise him, and while we're all entertained with this madness, the world slips closer and closer to war in region after region.

Hey CNN--wake up and start doing your job. The Washington Post is doing theirs, so maybe you should join forces with them.