This is How Trump Stays in Power 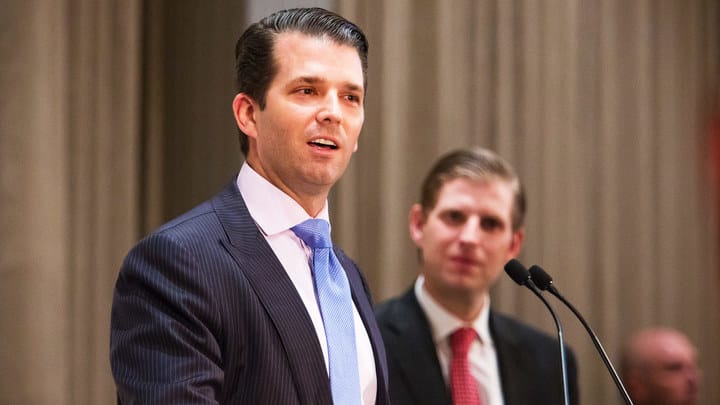 The most recent revelation by the New York Times certainly does link the Trump campaign to Russia in the most sinister of terms. It's an "oh shit" moment of the highest order and reveals to us that there were meetings that no one can run away from. You're not crazy if you call this treason. But the people leaking this information are actually hoping this will give them a chance to keep Trump in power:

Donald Trump Jr. was offered "damaging information about Hillary Clinton before agreeing to meet with a Kremlin-connected Russian lawyer during the 2016 campaign," the New York Times reported Sunday. Trump, Paul Manafort, and Jared Kushner met with Natalia Veselnitskaya in Trump Tower on June 9, 2016 — two weeks after Donald Trump clinched the Republican nomination for president. Trump Jr. in a statement said the meeting was about Russia's freeze of adoptions to the U.S. in retaliation for U.S. sanctions against individual Russians.

So, think of it this way. If Trump Jr., Kushner, and Manafort all take the blame for this, who comes out ahead? I'll give you three guesses and I'll spot you a hint: Beev Shannon. This information is coming out of his end of the West Wing. There's this fella names Steve Bannon and he's been trying to get rid of Kushner for weeks. Just thought I'd throw that out there.

We have to keep our eyes on the ball here. Manafort is small potatoes, as is Trump Jr. At a minimum, there are ten people who could go to jail right now and Trump would panic and start writing pardons for them, all of this before Robert Mueller even lifts a finger.

Yes, it would be nice to see Kushner in prison along with all of them, but none of those people is the really big fish in the pond. None of this matters if it doesn't implicate both Trump and Pence. The whole administration has to be brought down. This is all very, very damaging, but it does not lead to an obvious impeachment of the President and the Vice President. At some point, sacrifices will be made in order to throw people off the scent of the real prize. These are the sacrificial lambs being offered up in the hopes of making sure that Beev Shannon, I mean, Steve Bannon, holds on to power.

Of everyone involved, why do I keep thinking that Bannon is the only one without dirt under his fingernails and blood on his shoes? And given that there have now been several attempts to release information designed to discredit the media, I would be very wary of this information. I think it would all be better for us to wait for Robert Mueller's investigators, I really do.

Is this damaging? Absolutely. But if you can isolate the crime to a handful of campaign officials, you can insulate Trump and Pence from accountability. We cannot let them do that.