This is How the Russians Work Constructively 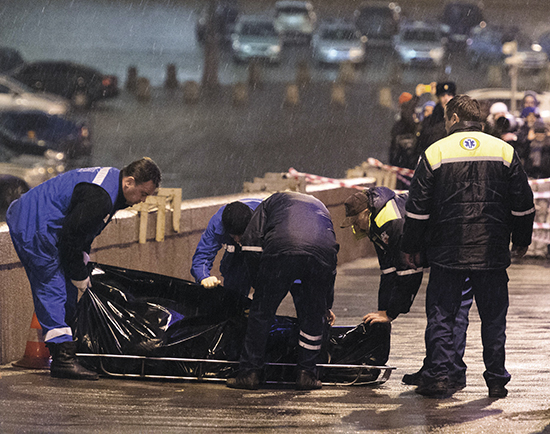 The man being zipped into the bodybag in Moscow was named Boris Nemtsov. This is how the Russians like to work "constructively" with those who oppose the Putin Regime. These are the people Trump wants to work with:

US President Donald Trump said Sunday it was time to work "constructively" with Russia, saying his counterpart Vladimir Putin had "vehemently denied" meddling in the 2016 election.

"I strongly pressed President Putin twice about Russian meddling in our election," Trump said after returning from Europe where he met Putin for the first time. "He vehemently denied it. I've already given my opinion....."

Writing on Twitter, Trump said he and Putin had talked about the idea of setting up what he called "an impenetrable cyber security unit" to prevent hacking in future elections.

He also said the two men had discussed the implementation of a ceasefire in Syria which began on Sunday, saying "it will save lives".

"Now it is time to move forward in working constructively with Russia!"

Oh, good luck with that. How much do you want to bet that the Russians will have their diplomatic properties returned to them and their sanctions lifted by the end of this month? America has been sold down the river for bargain prices.