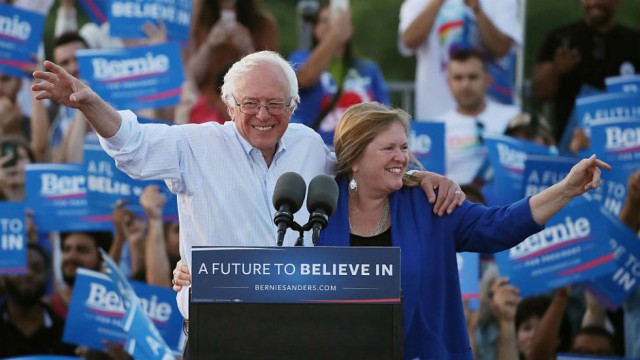 I would be willing to accept what Bernie and Jane Sanders have to say about her current predicament if they would simply release their tax returns and file the proper financial disclosures on time:

The federal investigation into Jane Sanders, the wife Sen. Bernie Sanders(I-Vt.), has reportedly escalated in recent months, The Washington Post reported on Monday.

Prosecutors have taken more than a dozen boxes containing documents and records from Burlington College, where Jane Sanders once served as the school’s president, the Post reported, according to interviews and documents.

A state official has also reportedly been called to testify on the matter before a grand jury.

The newspaper reported that half a dozen people said federal prosecutors or investigators had contacted them recently.

Jane Sanders’ lawyers also interviewed these individuals to determine what they might tell investigators, former college trustees told the Post.

The FBI is reportedly looking into whether Jane Sanders falsified loan documents while serving at the school, which closed down in May 2016 after going bankrupt and failing to meet accreditation standards.

A Vermont-based blog, VTDigger, reported last year that Jane Sanders inflated how much the small Vermont college had secured in donations, noting two instances in which a person said the amount of their financial pledge had been exaggerated on the school's loan application.

They sure would look a lot less guilty if they were open and honest about their financial status, wouldn't they?

We, as Democrats, cannot sit here and criticize Trump if we have a double standard for Bernie Sanders. I refuse to be a hypocrite. If you want to run for president, you have to release your tax returns. You have to file your mandated disclosure paperwork on time. You cannot run around raising money from shady people and hide it. I don't care who you are. We cannot tolerate this lack of ethics in public life no matter which side you're on.

This has gone well beyond partisan politics. If Bernie and his wife have nothing to hide, they would have disclosed their finances more than a year ago. Instead, we see obstruction and obfuscation. Instead, we see them looking for new ways to solicit donations so they can do their work. Who's being suckered into this scam? They don't need the money. They need to help us fight Donald Trump. The inability of Sanders to at least let the people who voted for him know how much of their money has gone to himself and to his wife is the subject of countless inquiries that will never get answered. These are not the sort of qualities you want in a democratic socialist. You want transparency? No way, man.

What would happen if some of the money they've raised since the end of the 2016 primary season ended up defending Jane Sanders from an investigation by the Federal Government? Would anyone ask for it back?

I ask this rude question because every time Bernie Sanders raises money, there is the possibility that that money could have gone to help elect Democrats. As a member of the Democratic Party, I do take that personally. My personal wish is that all of this goes away and there is no scandal. Until now, I have yet to see anything forthcoming from Sanders and his wife. This is not a recipe for good governance or leadership.