Hypothetically, What is the Price of Your Loyalty to America? 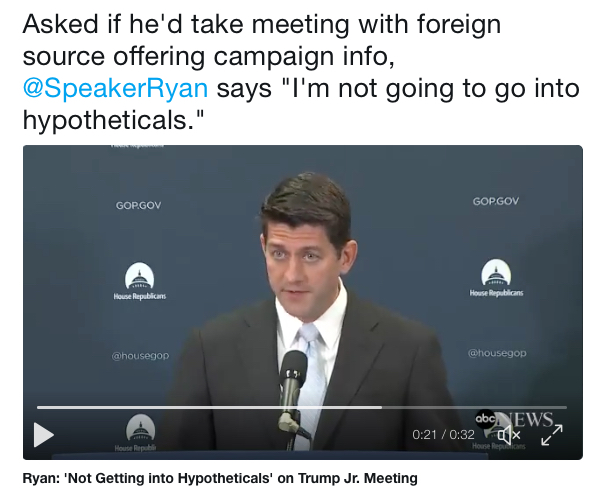 Well, that was an artful dodge if there ever was one.

People all over the Internet are trying to downplay the use of the word "treason" because of the legal definitions currently in use. Treason happens when you betray your country by throwing in with a foreign government that is overtly hostile to the interests of the United States of America. Treason is when you put your own lust for power ahead of country. Treason is when maintain your hold on political power is secondary to a demonstrable abuse of power in order to win an election.

1. Trump, and everyone around him, are all guilty of treason because they needed help from Russia to win the presidency. Seizing the presidency WAS the ACT OF WAR. Given the power of the presidency to wage war and defend the Constitution, the attainment of such office by use of aid from a foreign government is, de facto, the necessary act of war upon the Constitution itself to justify the use of this term. If you use the assistance of a foreign government to seize the most powerful office in America, you have committed treason in order to assume the power to take this country into war. This may not be so if all you're doing is winning some other political race. Then, you're just un-American and unethical. To seize control of the Executive Branch is to make war against the idea of the country itself.

2. Unless the American voter removes his or her head from their ass, Speaker Paul Ryan will continue to ignore the fact that the government of the United States of America is in a shambles because he refuses to use the power of his position to correct the problems at hand. Do not expect Paul Ryan to suddenly become a learned or wise leader of Americans. Expect him to run from every answer in order to maintain a tenuous grasp on what little power he has.

Power that is not used when it needs to be used evaporates fast.

And, remember. The vast majority of Americans are not paying attention to any of this. They are vaguely aware that Trump has done something stupid or wrong. They do not care right now. The population is not fully awake and many are wondering, "why isn't the election already done with?" Current events are not followed and this is not intruding on our regularly scheduled programming. The media must seize the opportunity to deny Americans their beloved little shows and explain to them that we are now ruled by Russian agents.