All Democrats Should Vote No 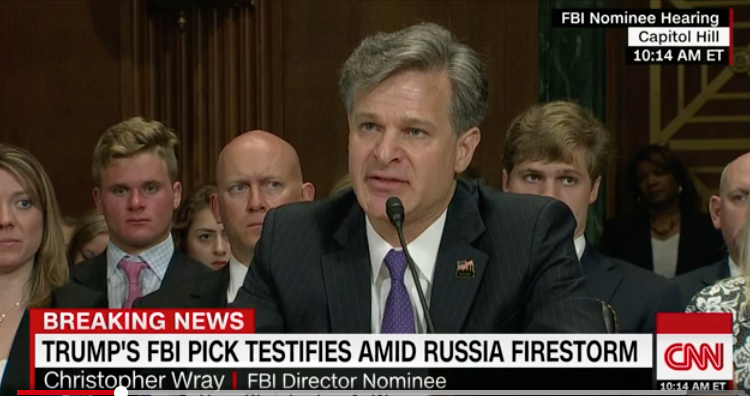 How could anyone believe anything that comes out of the mouth of a Trump nominee for anything ever again?

Despite recent turmoil surrounding the administration, Wray's testimony convinced at least one Democrat he was suited for the job. The committee's top Democrat, Sen. Dianne Feinstein of California, said after the morning's questioning, she planned to vote for Wray's confirmation.

Wray during his testimony told Democratic Sen. Patrick Leahy of Vermont that no one in the administration asked him for a "loyalty pledge," as former FBI Director James Comey alleged Trump asked for earlier this year.

"And I as sure as heck didn't offer one," Wray said.

Wray also said that Justice Department Special Counsel Robert Mueller is not on a "witch hunt," as the President has alleged.

So, that means he was asked to pledge his loyalty, right? I mean, every single one of these fuckers has lied to the Congress so--what are we even doing here? Nothing is going to be normal just because of a single hearing before Congress. You have to have "not normal" as your default setting right now because, well, holy shit, people. The rule of law doesn't mean anything to anyone associated with Trump right now.

Where did Diane Feinstein ever get the idea that a Trump nominee would tell the truth? It's not like there aren't precedents and examples where this has come back to bite us all in the ass.

No Democrat should vote for Mr. Wray. No one should find themselves wondering what the right thing to do is. The right thing is to resist Donald Trump's assault on the rule of law.