Tucker Carlson is Part of the Republican Tribe 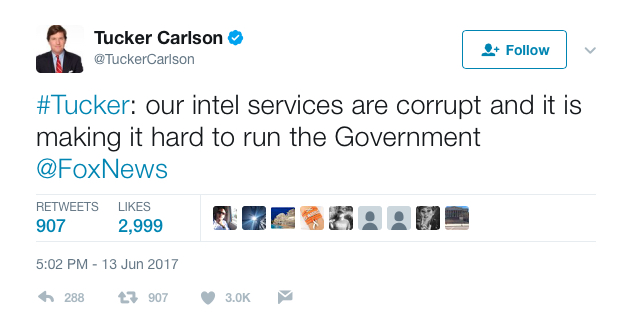 This is pretty reprehensible thing to say, and I'm sure that Tucker Carlson only believes this up to a point. That is, I think he is expressing a tribalist belief that the "intel services" are "corrupt" only because they are presenting us with evidence that overt acts of treason elected Donald Trump. When your guy gets caught pussyfooting with the Russians through the diligent work of trained professionals, the intellectually honest thing to do is to acknowledge it and move on. When you are intellectually dishonest like Tucker Carlson, you become a flaming turd about it and stomp your baby feet.

You can see this coming from a mile away. This sentiment is expressed in order to outrage liberals and those who support the intelligence community because those two groups are now diametrically opposed to the treasonous elements clinging to power right now. Carlson is only against them because they are delivering proof of his own complicity in supporting and electing Donald Trump. Nobody likes to be proven wrong about something as basic as this. So, you get these hysterical missives and they should be laughed at.

They are all wrong; they are all saying things because their team is under attack. Everyone aligned with Carlson has enough of a connection with the insiders to know that the Republican Party will face a horrific summer and fall and then be held accountable in the next election cycle. Both houses of Congress will be in the hands of the Democrats as soon as the voters are given a chance to make it happen. 2017 and 2018 are going to be horrific years of realignment.

In the first place, the "intel services" are not corrupt. The American intelligence community has more oversight and compliance over itself than virtually any other in the world, save perhaps those in Scandanavian countries or in the Five Eyes community. This oversight was won over decades of conflict between the Executive branch and the Congress. Are there bad people in the IC? Of course, and they should be rooted out. They are, in fact, identified and removed on a regular basis because of the compliance checks and auditing that goes on. Is there abuse? Absolutely, but the only reason you know about it is because people with the right skills and a sense of right and wrong are constantly working to improve our intelligence efforts and operate within the confines of the law.

In the second place, oversight of these agencies rests entirely with the Congress. If the intel services are corrupt, it is because a Republican-controlled House and Senate have failed to perform  their duties. Today, the Republicans in the Senate defenestrated themselves in public because they could not hold their old friend Jeff accountable for signing up with Trump's bandwagon full of turds and mooks. In 1974 or 1984 or even 1994, ol' Jeff would have been set out with the trash by anyone with a law degree regardless of their party affiliation. That's how far we've fallen.

Third, the FBI's counterintelligence efforts are devastatingly effective and have been honed over the years to the point where I am really shocked that the Trump people believed they could escape detection. Everything I've seen points to a belief that Trump and his people thought they were smarter than everyone and more cutting edge with regards to the use of technology and databases and information lists. When the government finally gets around to analyzing the information that went back and forth between Trump and the Russians and when they tell us what it means, this will go down as a tremendous counterintelligence effort that did not prevent Trump's election but, ultimately, will save this country. We are watching this effort unfold in slow motion with the precision of the well-oiled machine Trump thinks he controls. He does not control any of it, and thus you see his rage on a regular basis. The FBI has him, and he knows it.

So, no. This is not the "deep state" or anything like that. This is the rule of law in action. It moves slowly, but it is moving in the right direction. Expect panic in the days ahead. Expect people like Carlson to say one thing today and then tweet something completely opposite in a few years time. There is no accountability for media figures. They are usually wrong, their finger is always in the air, and they always follow the conventional wisdom of their tribe. They are never, ever capable of a single original thought and they are never prescient about anything through skill, only luck.