Trump is Going After Comey's Manhood 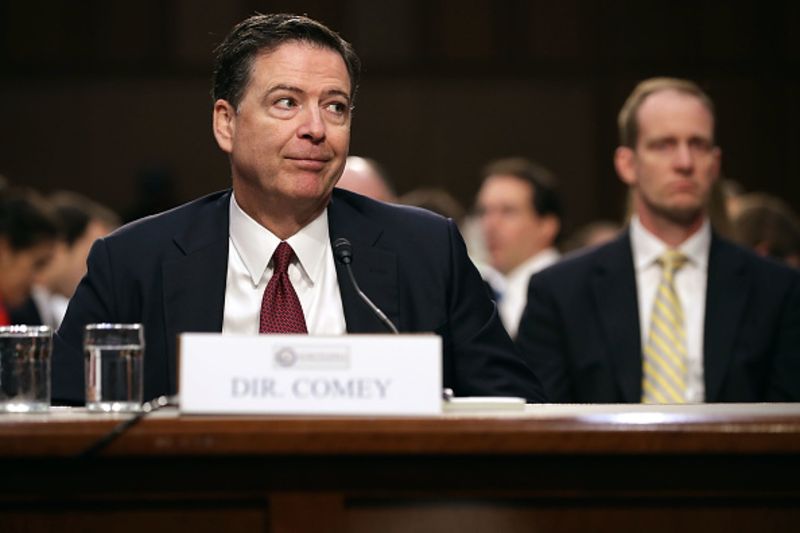 How do you know the Trump team is out of ideas and is terrified? Well, look at their new strategy:

The Trump White House and its allies are determined to convince you that ousted FBI director James Comey is worse than just a “LEAKER!”—he’s also a gigantic wuss, apparently.

On Sunday morning, President Donald Trump woke up early to again vent his frustrations on Twitter, his preferred medium. Among @realDonaldTrump’s grievances was that the fired FBI director was “very” much so a coward.

“I believe the James Comey leaks will be far more prevalent than anyone ever thought possible,” the president posted in one tweet. “Totally illegal? Very ‘cowardly!’”

It’s the president personally getting in on what one senior Trump administration official described to The Daily Beast as the “‘Comey is a pussy’ offensive.”

“It minimizes [Comey and] undermines the seriousness of his testimony and claims,” the official noted, chuckling. The official spoke on the condition of anonymity so as to speak freely.

Ever since Comey testified under oath before the Senate, perhaps the pettiesttalking point to emerge out of Trump-world has been that the ex- FBI head isn’t much of a tough guy. Last week, Comey testified that Trump pressuring him to go easy on Trump’s former national security adviser Michael Flynnwas “a very disturbing thing, [and] very concerning.”

On CNN’s State of the Union on Sunday morning, Trump campaign adviser David Urban—who was reportedly shortlisted for a senior White House post—said that Comey had “scampered outside to his SUV” after a tense meeting with Trump, instead of actually pushing back effectively against the president.

Corey Lewandowski, Trump’s fired campaign manager who has been angling for a return to Trump’s side, said on Friday that Comey was not “man enough” simply because the former FBI director had a friend last month leak the contents of a memo, instead of leaking it to the press himself.

“He gave his notes to a Columbia law professor because he wasn’t man enough to give the notes directly to the media when he wanted them out to the media,” Lewandowski declared on NBC’s Today.

Others, such as Donald Trump Jr., were eager to point out that either Comey is conveniently pretending to be a wimp, or really is one.

“If the head of the FBI is saying... ‘Well, if I was a stronger individual’... Gimme a break! You’re the head of the FBI!” Trump’s son said on Fox News’ Justice with Judge Jeanine that aired on Saturday. “You’re not some baby... Does anyone believe this? And if he is, he’s that guy? Like, he’s not strong enough to say something that he believes is right? Then he goes and writes a memo, then he leaks it to The New York Times.”

Yeah, it just might work. Or, it might continue to blow up in their faces. Swear to God, the Trump team has the cognitive ability of a Scooby Doo villain.

James Comey is certainly a threat to the Trump regime, but, really, it is Robert Mueller who holds all of the cards. He is an existential threat to the continuation of this president in office, which is why I have said all along that Mueller is probably going to be fired before he can really start to investigate Trump. The scenario could play out like this--Sessions fires Mueller, resigns, and Trump issues pardons in order to "move the country forward." Something like that would be unlikely, which is the entire reason there even is a Trump presidency. Everything they do is "unlikely" and "horrible" at the same time.

Going after Comey's manhood is hilarious. This is banana republic behavior.