There is No One More Crooked Than Donald Trump 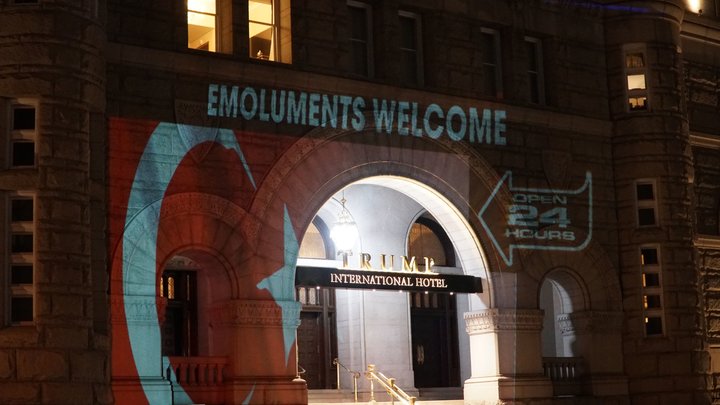 The reason why there are distractions and scandals and outright crazy things swirling around Trump right now is to keep people from noticing that he's a crook who has lawyers who help him make crooked arguments:

A nonprofit group's claim that President Trump is violating the Emoluments Clause of the U.S. Constitution should be dismissed because the plaintiffs have no standing to sue, according to a court filing by the Department of Justice.

"Those claims falter on threshold grounds: no Plaintiff has alleged an injury" that meets the standing requirement, the DOJ says in a document submitted in federal court.

The administration's argument is a response to the lawsuit filed in January in the Southern District of New York by the Citizens for Responsibility and Ethics in Washington. The suit claims Trump is violating the Emoluments Clause whenever foreign entities book rooms at the Trump D.C. hotel or lease Trump office space.

The "injury" to the plaintiff is when a foreign government persuades Trump to do something that is not in the interests of the American people. That's not only easy to prove, it can sometimes come with dead bodies, smashed equipment, and grievous losses. When you're accepting graft from foreign governments, this affects the safety and security of American interests abroad. There is definitely an "injury" to a plaintiff--in this case, the American people--that can be proven. Come on with this bullshit. Trump's venality and incompetence are already creating a massive amount of damage for this country.

CREW is asking the court "to stop Trump from violating the Constitution by illegally receiving payments from foreign governments" with ties to Trump business interests. The lawsuit states:

"These violations of the Foreign Emoluments Clause pose a grave threat to the United States and its citizens. As the Framers were aware, private financial interests can subtly sway even the most virtuous leaders, and entanglements between American officials and foreign powers could pose a creeping, insidious threat to the Republic."

The suit cites numerous examples of how Trump personally stands to profit from doing business with companies linked to foreign governments. For example, the Industrial and Commercial Bank of China, which is owned by the Chinese government, is a tenant at Trump Tower in New York, and its lease is due to expire during Trump's term, the suit says.

That means the Chinese government would be in negotiations with the Trump Organization to renew the lease — and it might agree to extremely favorable terms that, in effect, would be a financial gift to the president.

In and of itself, this would have ended the presidency of anyone else. In Trump's America, you throw up your hands and say whatever because there is no accountability, no rule of law, no adult in charge, and no one willing to act on behalf of the good of the country. Does it even have to be explained anymore? If Trump is president, why the hell is he desperate to shove as much cash in his pants as possible? He should be grateful the country elected him. Instead, he's created a thin veneer of phony divestiture and is grabbing every penny he can find while using the government as a piggy bank.

There is no shame. There is no decency. There's just the next buck that the president is going to grab like it's the last donut in the break room.

How many of Trump's low information voters even know what the Emoluments Clause even is? What a shit show.