Obstruction of Justice Comes at You Fast 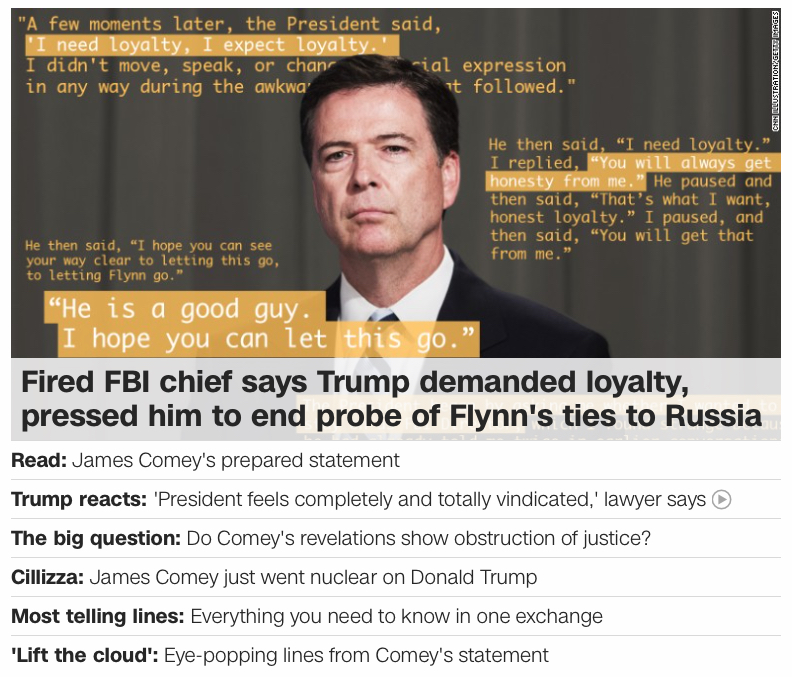 If anyone tells you that this is no big deal, laugh in their face.

If anyone says that the Democrats are overreaching, walk away.

If anyone says that Donald Trump isn't guilty of obstruction of justice, then you know the fix is in.

Again and again, James Comey acted very cagily. When he told Trump that he wasn't under investigation personally, the mere fact that you could drive a Mack truck through that loophole never really sunk in for Trump. Robert Mueller is going to tear through Trump like shit through a goose because of the set-up that Comey has prepared. Comey is the rock and Mueller is the hard place. Trumpy's in the middle, along with everyone who signed on for his fail parade.

Fired FBI Director James Comey aimed a dagger blow at Donald Trump Wednesday, saying the President had demanded his loyalty, pressed him to drop a probe into ex-national security adviser Michael Flynn and repeatedly pressured him to publicly declare that he was not under investigation.

Comey magnified the political crisis engulfing the White House by releasing his opening statement ahead of a blockbuster appearance on Capitol Hill on Thursday. The dramatic document sketched a stunningly detailed account of Comey's intimate meetings with the President, included direct quotes from Trump and revealed the former FBI chief's discomfort with the President's behavior.

The testimony appeared to bolster the case of Trump critics who believe that the President may have obstructed justice and abused his power in his dealings with Comey, who he later fired.

Comey said that Trump asked him to drop FBI investigations into Flynn centering on his calls with Russian ambassador Sergey Kislyak during the transition, which eventually led to his dismissal as national security adviser after it emerged he had lied about the conversations to Vice President Mike Pence.

The law means nothing to this regime. The rule of law is not functioning at present. We are, right now, not the Republic that was founded--we are a nation of men instead of laws. The Constitution has a remedy but there are not enough people with the right amount of courage to uphold the founding principles of this government. In effect, America is over until we restore the rule of law.

This is because we now know that Trump operates like a gangster when he demands "loyalty." He is a law unto himself. He doesn't believe in any check on his power. He believes that he can snap a finger or wave a hand and every practical check on his power can be ignored, destroyed, thrown away, or eliminated. The law stopped functioning on January 20, 2017. And so, never mind the law--Trump will obstruct justice like any two-bit thug. He will break the law and use whatever power and influence he has to monkey-wrench whatever is thrown at him. He surrounds himself with people who have dubious legal skills and expects them to create the Orange Firewall around the stumbling bag of circus peanuts who stole the 2016 election.

If everything that we now know is true about Trump, thanks to Comey, were true of Hillary Clinton, the Republicans would have burned down every square block of Washington D.C. I'm sorry but my opinion is this--the 2016 election should be invalidated (relax, they won't do that). The results of the election are invalid. Trump is not a legitimate president. If the Electoral College electors had known everything that is now in the public record, there is no way they would have certified Trump as president without they, themselves becoming complicit in the greatest crime in American political history.

That's what we are sitting on right now. This surpasses Watergate, the Teapot Dome scandal, everything that came before it. Russiagate is now the greatest crime perpetrated by an American politician in U.S. History.

Anybody says otherwise, give them the finger. That's where we're at. We're watching, in real-time, the greatest scandal of all time unfold before our eyes.