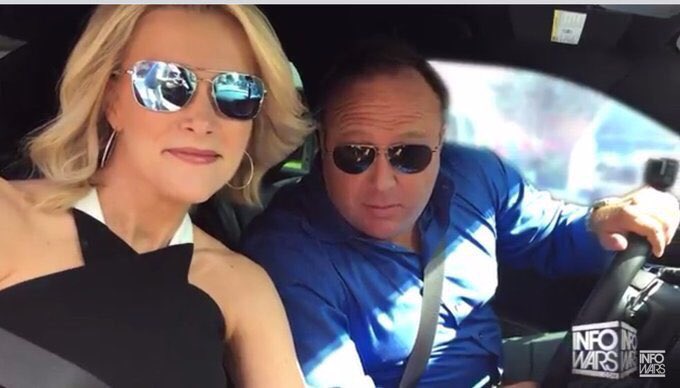 Exhibit A for the complete and utter normalization of insanity and bigotry in this country. NBC News has completely and utterly abandoned any pretense of being a news organization. If I gave a crap, I would wonder what Tom Brokaw thinks of this, but let's be honest--if he was being paid Megyn Kelly money, he'd giggle and smirk with Alex Jones as well.

You can take the clown out of Fox News, but you can't take the Fox News out of the clown.

UPDATE: And so it begins...

After defending her decision to sit down with controversial InfoWars host Alex Jones on Sunday Night With Megyn Kelly, Megyn Kelly must now must grapple with J.P. Morgan Chase’s decision to temporarily pull its advertising from NBC over the interview. According to The Wall Street Journal, the bank has reportedly “asked for its local TV ads and digital ads to be removed from Ms. Kelly’s show and from all NBC news programming until after the show airs.” On Monday morning J.P. Morgan Chase’s Chief Marketing Officer Kristin Lemkau took to Twitter to express her dismay over Kelly’s decision to speak with Jones on her program. Lemkau wrote, “As an advertiser, I’m repulsed that @megynkelly would give a second of airtime to someone who says Sandy Hook and Aurora are hoaxes. Why?,” a sentiment shared by family members of those killed in the 2012 mass shooting.

You can pull a lot of shit in this country, but you cannot normalize Alex Jones. That's simply not going to fly.