Mitch McConnell Sends the Leopards to Eat All of Your Faces 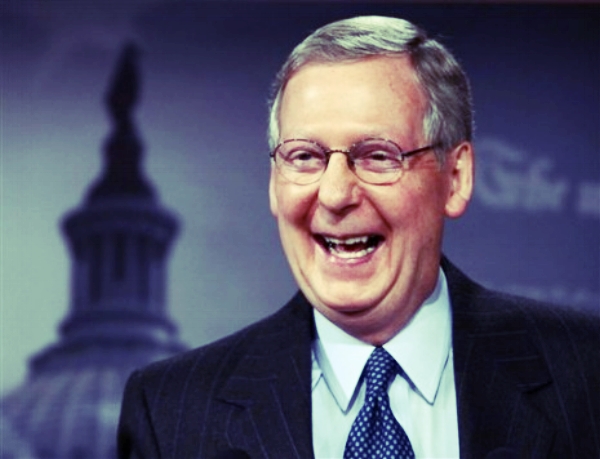 The Senate unveiled its big secret tax-cut plan on Thursday morning. It also contains some elements dealing with healthcare that will make the lives of millions of sick and elderly Americans immeasurably worse, but, since it's actually a tax-cut bill, and it actually does cut taxes for the wealthiest among us, then I guess you can say the strategy was a success. And they say the Republicans can't govern. Hah.

The best line of the 2016 election was this:

'I never thought leopards would eat MY face,' sobs woman who voted for the Leopards Eating People's Faces Party.

Mitch McConnell is made of absolute teflon. He has done more damage than any other leader in Congress has ever done to the American people. He obstructed for eight years, stole a Supreme Court seat, stole countless judicial nominations, and left the American economy to rot without lifting a finger in the way of an economic stimulus or a jobs bill or anything that would improve the economy and relieve pressure on working people. He is the destroyer of dreams. Anyone suffering without a job, without healthcare, without hope and without the basic needs that should be provided by a responsible government should look to the legislative shenanigans he hath wrought.

Our worthless media has enabled him for years. You want to blame Trump, fine. But this is McConnell's doing, too. He's in the driver's seat because Trump is too fucking stupid to drop a massive tax cut for the wealthy on the public and call it a health care bill.

The leopards are here to eat fucking faces. The American people voted for it. They just voted to give Karen Handel a chance to help out in the House with this abomination. This is the abomination nation. What crazy shit are they going to pull next?

Ever feel like you've been cheated, Trump voters? Well, go fuck yourselves. Today, I have no sympathy for you. Tomorrow, I'll probably think about how I can moderate that view.  Right now, you get nothing.