Kentucky Taxpayers Had to Foot the Bill For This Thing 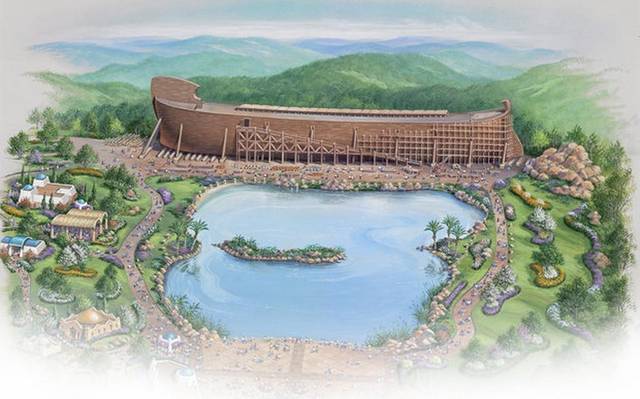 This is a classic example of how a news organization can cover something and absolutely refuse to practice even the most basic form of journalism:

It is a mind-blowing sight: A Noah's Ark nestled in the rolling, green hills of tiny Williamstown, northern Kentucky. Arguably one of the more unlikely places on the planet for such a thing to exist.

The Ark is biblical in size, nearly the length of two football fields. It's wide, too -- 85 feet. And it is eight stories high. It took thousands of workers, including hundreds of Amish craftsmen, 24 months to build.

"It's the biggest timber frame structure in the world," the Ark's founder, Ken Ham, told me on the top deck of the Ark -- which will include an upscale restaurant.

I believed Ham's boast about the Ark's size, then wondered aloud how Noah could have constructed such a massive vessel in Biblical times.

"Noah might have taken a lot longer," Ham said. "Plus he could have hired people from the population just like we have."

Ham runs a Christian ministry dedicated to spreading Creationism. He believes in a literal interpretation of the book of Genesis, insisting a 600-year-old Noah was commanded by God to build an ark and then, "Together with his sons, his wife, and his sons' wives, Noah went into the ark because of the waters of the flood." I'm sure you've heard the rest...

Yeah, here's the rest of it--Ham is actively engaged in trying to debunk this thing we call science. And the science is pretty clear--creationism is a comic book story that people can use to make sure kids don't learn anything in school. And, in Ham's case, it's a great way to get an $18 million dollar tax break out of Kentucky taxpayers.

Absent from the article is any real perspective as to whether or not taxpayers should foot the bill for a religious theme park, but hey. It's big! It's massive! It might be based on something right--who knows? Opinions differ.