If Jon Ossoff Loses, Blame Gerrymandering Above All Else

When Jon Ossoff was the C.E.O. of the Emmy-winning production company Insight TWI, which has made documentaries exposing judiciary corruption in Ghana and war crimes in Iraq, among other subjects, he had a simple mantra for the company’s approach: “Name, shame, and jail.” That’s the motto of a Ghanaian journalist, Anas Aremeyaw Anas, who worked on the documentary about judicial corruption; Ossoff cited it in an interview, last September, with the newsletter for Atlanta’s Paideia School, his alma mater. This was, of course, before Donald Trump was elected President—and before Trump selected Tom Price, the congressman from Georgia’s Sixth District, where Ossoff grew up, to be the Secretary of Health and Human Services. In January, Ossoff, who’s thirty, jumped into the race, which has been called a referendum on the early days of Trump’s Presidency. His first fund-raising pitch was “Make Trump Furious.” But, when he talks about the President now, he’s more measured than some of his fellow-Democrats. In an incendiary time, Ossoff has striven to be nonflammable.

I spoke to Ossoff on Friday, as he headed to a rally for millennials. A recent pollhas him leading his Republican opponent, Karen Handel, a former Georgia secretary of state who has failed in prior bids to become governor and a state senator, by less than two points. Handel has had Trump, along with Vice-President Mike Pence and Speaker of the House Paul Ryan, give local speeches on her behalf. (Trump told her, “You’d better win.”) But the many moderate Republicans in the district—which encompasses the mostly wealthy and mostly white suburbs north of Atlanta, and which opted for Marco Rubio in the Republican Presidential primary last year—aren’t necessarily true believers in Trump or Handel. Even so, Ossoff tends to bite his tongue a bit when speaking about the President. In our conversation, he referred to “the atmosphere of chaos and scandal and disarray in Washington,” but he declined to use the word “impeach”—“I don’t think we’re there yet,” he said—and told me that he hoped to avoid provoking “extreme partisanship.” In April, when “Hardball” ’s Chris Matthews pressed him to characterize Trump, Ossoff finally allowed, after much baiting, “I don’t have great personal admiration for the man.” He would go no further.

This approach—and Ossoff’s more moderate policy positions, such as his disinclination to raise taxes on the wealthy or to move toward single-payer health care—has led some to wonder whether, as a recent article in The New Republic put it, he is a “moderate Republican” or a “serious progressive dressed up as a centrist.” In that same appearance on “Hardball,” last April, Matthews asked Ossoff, “Are you a moderate or a progressive? Which word would you prefer?” “I try to shy away from labels and focus on the issues,” Ossoff replied. Matthews pressed him: “Give me a label.” “I’m pragmatic,” Ossoff said.

I mean, come on. Tell me this isn't designed for a Democrat to fail: 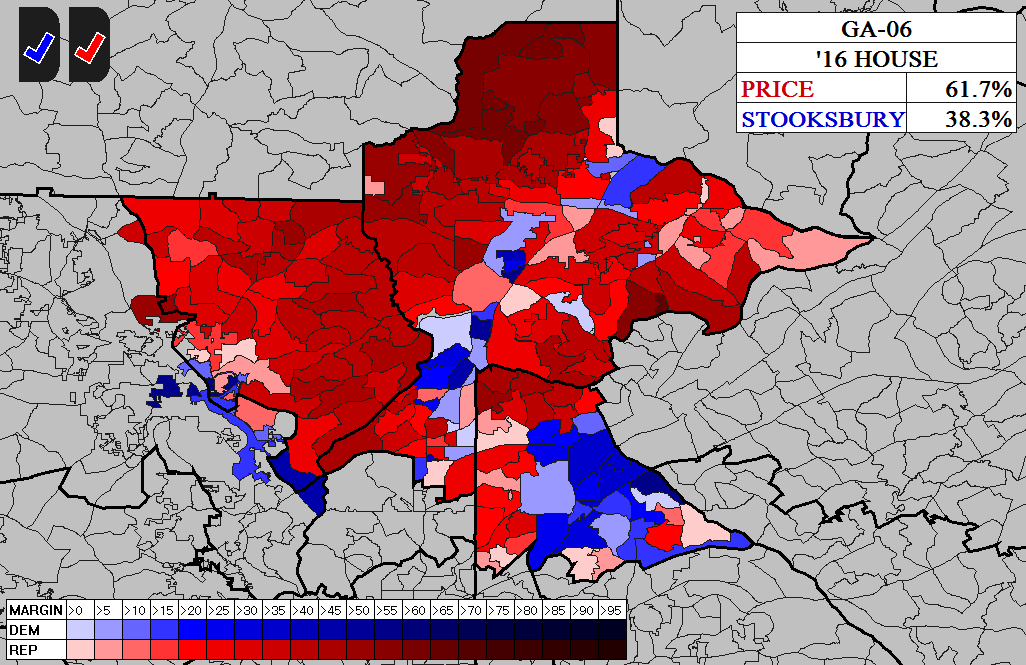 Ossoff is running exactly the kind of race this district needs. Second guessing him would be wrong because, well, look at the fucking map. Running like Bernie Sanders or like a city councilman in San Francisco would guarantee you exactly the same 38% if the vote that the Democratic candidate received a scan eight months ago. If you go to strong with the anti-Trump rhetoric, you hand your opponent a weapon to use against you. And, really, there's plenty of anti-Trump rhetoric to go around. Appearing to be above the fray brings in moderates and the undecideds, so it's all good.

The fact that this race is within the margin of error tells you that what Ossoff has been doing has been working. It might not be enough, but no one should accuse him of running the wrong race in this district. Good God, give him a medal and recruit him to run for the Senate if things don't go his way.

There not enough Democrats in this district. Period. End of story. It all comes down to moderates and centrists. Yes, liberal ideas always poll better, but the sad fact is, Americans will vote against their economic self-interest every time a Republican shows up with demagoguery and lies. Ossoff can't fight that with Trump sucks jokes and a promise to give everyone free college and Wi-Fi. The people in that district control their own fate right now. Will enough of them vote? And, if they don't, will it be because of apathy or will it be because of the fact that the laws all throughout the South favor Republicans because they willfully disenfranchise the people who make up the base of the Democratic Party?

I'm prepared for a loss but I hope Ossoff wins. I hope he can squeak this one out. I suspect that the Republicans will continue to use every dirty trick in the book to steal this one, too.