Trump Sticks His Foot In His Mouth Again 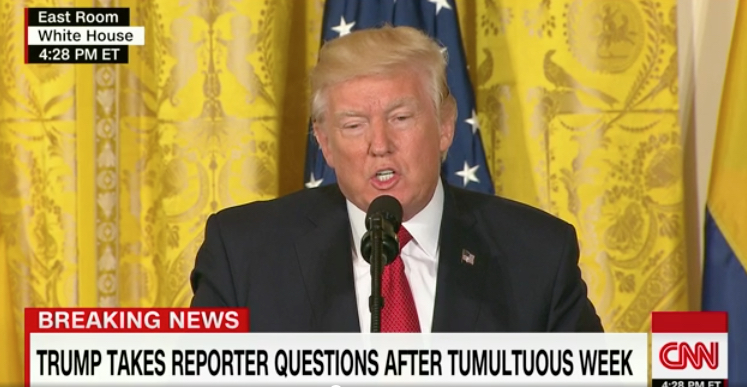 When you're involved in a pissing match with the Director of the Federal Bureau of Investigation, the right answer to every question is "no comment" or "I do not recall."

Ronald Reagan was smart enough to say "I don't recall" enough times to get off the hook. Trump is too stupid to learn how to say such a phrase. He's too stupid to do much of anything other than get himself deeper into legal jeopardy by publicly stating that he did not ask James Comey to end the investigation into Michael Flynn:

President Donald Trump said Thursday he did not ask FBI Director James Comey to end his investigation into Russia's involvement in the 2016 election and possible collusion with the Trump campaign.

Trump emphatically said "no" when asked during a joint news conference with Colombian President Juan Manuel Santos in the White House's East Room.

Now, who are you going to believe? The one person in Washington D.C. who has no credibility at all (that's Trump!) or the guy with a history of taking meticulous notes because he has a law enforcement background (that's Comey!)? I have to believe that there is no one who can talk sense into Trump because he is acting exactly as if this whole thing is tantamount to putting up a rip-off apartment building on the Lower East Side. He does not seem aware of the legal jeopardy he is in. You don't make a public statement that can be refuted with ease when you're trying to climb out of the hole you dug for yourself. You say, "that doesn't match my recollection" and move on.

Trump's answer of "no" is all the proof you need that, no matter what his advisors try to tell him, he's blowing them off and making fun of them behind their backs. He is the single dumbest person in his entire organization and anyone who is still working for him past five o'clock on Friday is going to have to take out a second mortgage on whatever they own in order to hire an attorney to make going to jail less painful.

Every single thing Trump has done to make this work is an unforced error, a self-inflicted wound, and an amateurish move. Hey, maybe he really doesn't want the job anymore and wants to see his employees go to jail. That's the only plausible explanation right now. Trump's trying to screw everyone on his way out the door. I guess that'll show them up for leaking to the press that he likes two scoops of ice cream.