These Are Papers Signed By The President 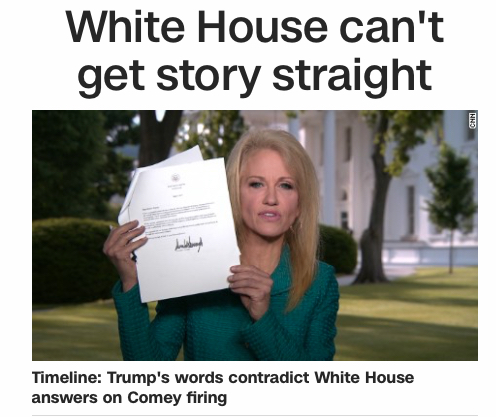 I know that making fun of Kellyanne Conway is the easiest thing in the world to do at this point, but, Good Lord. There's dumb and then there's Trump Flunky Dumb. They couldn't get any dumber if you paid a doctor to lobotomize them with a rusty spoon. Hell, that might actually be the secret to surviving in the White House--you gotta be Trump Flunky Dumb and the only way to get there is to remove your cerebellum.

It is impossible to take these people seriously anymore. Their own boss gave an ill-advised interview and basically threw every single one of them under the bus when he discounted everything that had been said and told Lester Holt that he had made up his mind to fire James Comey.

Do you know what someone who is severely co-dependent and addicted to being undermined in their chosen profession looks like? That person looks like someone who currently works for the President of the United States of America. Tomorrow, they will assemble like beaten, ragged misfit toys and go right back on television and lie until they come up with a better lie, and then they'll lie some more.

Anyone who puts Kellyanne Conway on television is enabling her abuse at the hands of the president. And it is mental abuse, there's no question about that. It may not be physical, but it's verbal and mental abuse, the likes of which no one has grasped as of yet.

Shouldn't we be talking about the 25th Amendment? I think we should.