The Hellhound is Back 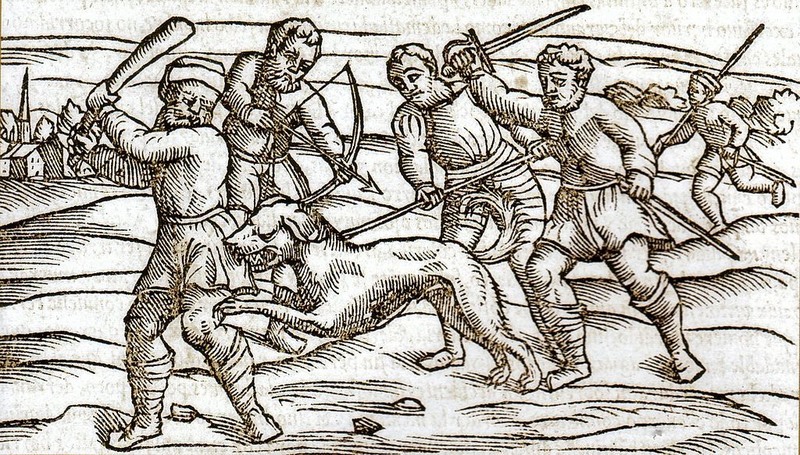 The fetters will burst, | and the wolf run free;

Much do I know, | and more can see

Of the fate of the gods, | the mighty in fight

The Hellhound is back.

There is a Hellhound nosing around the back door of the clubhouse on one Trump's golf courses. Trump keeps figuring out how to stay one step ahead of him, but it's a losing battle. If you've ever been on Trump golf course at night, there are two constants. One, the place is usually guarded by someone making the minimum wage and two, the whole place smells of old money being laundered somewhere. It's the smell of cheap things and something evil that has reared up with a greedy, empty soul. It throws chairs around and spits foul language. It has an ample gut and horrible manners, and this is what the Hellhound has made up his mind to run it to ground.

Cut to the scene where Trump is running around his white pants, trying to figure out which golf course he can hide in for a few more days.

When someone brings evil into the land, you can be safe in assuming that his wicked deeds are the things he does to keep the Hellhound at bay. Good deeds won't cut it because the Hellhound and his flaming eyes see through artifice and deceit. Only the worst deeds, the promises that are never intended to be kept and the foul oaths screamed into the empty night are all that's left. No amount of cash is ever going make Trump happy. No amount of power will satisfy. His pants keep getting tighter and the Russians who own him keep showing up unannounced. They smell like something abandoned in a fancy mall that no teenager would ever buy. They keep asking him to do this, do that, and in exchange, they hand over the things Trump needs to keep the Hellhound at bay.

The holes get bigger. The holes open up, one by one, and something has to be fed into them. No wife, no child, no mistress, no friend, no employee will ever be enough. He chases a hole in a soul because there's nothing to fill it with.

"Hellhounds start to chase me man, I was a running fool, My ankles caught on fire, couldn't keep my puppies cool"

Trump is a man who shovels in all the glittering, gilded things he can find. He obsesses over food, sex, women, money, power, and boasts like they are going to fill that hole eventually. He's a cartoon villain with real-world powers. There are now holes in the Earth, craters, bomb-blasted things because of the things he cannot satisfy. There are people who are now dead because the American voter's answer to the 2016 campaign was "YOLO" without a second thought.

Every time Trump opens his mouth to say something cruel, he is assured of himself. He is certain that he is saying verifiable, true because he believes that he can invent the truth out of thin air (and who are you to say he's a liar? He won the presidency, sucker). No other being is so self-assured. We live in a world of doubt, of verifying things, of wanting to be right. This is why Trump won--the truth is what losers wait to figure out. Trump smashes through all of those barriers and if he's caught in a lie, well, so what? Being right no longer matters. Being sure is what costs people time and effort. We're all playing the game the wrong way. Trump changed the rules and no one knows what they are anymore.

The Hellhound is sure of one thing. It's never enough for Trump. He'll never find happiness, so he's got to keep doing bad things to the people and places and things in this world. And so he keeps running, down through the streets at night, looking in all the windows, looking for Trump.

Trump's fear of dogs is the stuff of legend. His use of the word dog is equivalent to a curse word. He equates everything sordid and low in this world with a dog. The Hellhound doesn't mind. He knows what he is. Trump lies to himself about what he is, but the Hellhound will tell you without asking--I have come to drag you back to hell, humans. I have come for the worst of you because that's my job. You cannot hide what you are from the thing that will take you in its mouth with teeth stained by horrors unseen. You can plead while he drags you to the gates of hell but those ears are tuning you out all the way there.

Trump delights in the pain of others, pain he has caused, pain inflicted because he can do it and get away with it. This man started out devising a way for his rental properties to be rented only to white people. He built things by lying, cheating and stealing. He took money and wasted it. He borrowed things and did not give them back. He left others holding the bag. He signed contracts with people to pay them for the things they built for him and then he never paid them. He ran for president as a racist, knowing full well that the shock and the power of his words would divide just the right people and allow him to win the election. He made common cause with the Russians to target the weakest and flood them with disinformation. He waited for others to attack Hillary with nonsense. He made the colossal decision to equate her with being a criminal when he, himself was the real criminal.

The Hellhound sees all, knows all. You can't cheat that many people and lie like that and then walk around without a fear of judgement.

When Trump fired James Comey, he may have thought that he would set the Hellhound off on the trail of another. And there is no doubt--Comey deserves to be chased for a while. But that Hellhound isn't going to trifle with small things. Trump is running, and he's looking over his shoulder, and the Hellhound has a hold of the seat of his pants, snarling blood out of one side of his face and breathing fire out of the other.

In the days and weeks ahead, you will see so many things, but one thing you won't hear is the chain that the Hellhound drags behind him. That's the only music Trump hears anymore. That chain, on the ground, getting louder and getting closer.