The Court Jester in the Kingdom of Bullshit 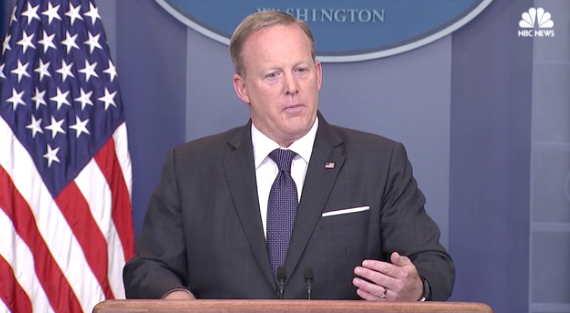 This man said nothing about everything today:

White House Press Secretary Sean Spicer's more than ten-minute recap of Trump's trip to Saudi Arabia, Israel, the Vatican and the G-7 summit in Italy included such phrases as "historic," "unprecedented," and "extraordinary".

Spicer was less verbose when asked about reports from over the weekend that the president's son-in-law and senior adviser Jared Kushner sought to set up a back channel with Russia prior to Trump's inauguration. Trump lawyer Michael Cohen confirmed to NBC that he is now also part of Congress' Russia probe.

The mere fact that the media even shows up at these briefings enables the Trump Regime to continue lying to the American people. They should run a disclaimer before every statement of this White House--no one is telling the truth, no one is capable of giving a straight answer, and we are now a banana republic. The first rule of the press is not to tell us what the spokesman for the president said. The first rule of the press is to tell us when the government is no longer telling the truth about anything.

Welcome to the Banana Republic of the United States of America. Our el presidente is a liar, his courtiers are protecting him, and this is a kingdom founded on bullshit. Spicey is the court jester, and all he needs is a better hat.