Putin Owns Trump and Everyone Knows It 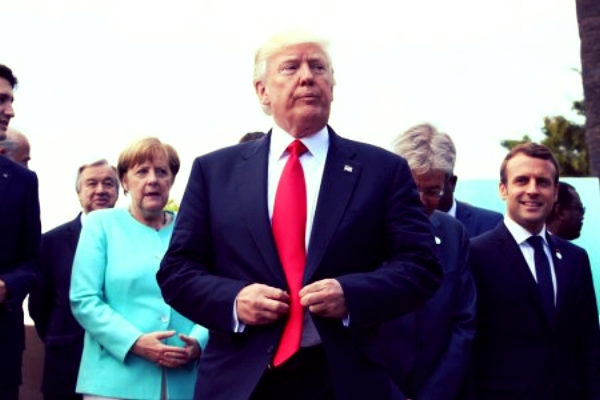 "The times when we could completely rely on others are, to an extent, over," Merkel said at a campaign event in Munich.

She didn't mention Trump by name in the speech but alluded to the US President's first foreign trip, where he lambasted NATO allies for their defense expenditure and also labeled Germany "very bad" on trade.

"I experienced that in the last a few days, and therefore I can only say that we Europeans must really take our fate into our own hands, of course in friendship with the United States and in friendship with Great Britain and as good neighbors wherever it is possible, also with Russia and also with all the other countries," Merkel said.

The Globe and Mail:

Her comments seem to indicate she saw no improvement in her relationship with Mr. Trump after their famously frosty meeting at the White House in March. The Taormina summit turned into the G6 plus one. The event, which came to an inglorious end on Saturday, cannot be considered an outright failure. But it came pretty close.

Don’t blame the Italian hosts, who had spent four solid months trying to build a consensus on key matters, such as climate change, and only partly succeeded. The exceedingly short, undetailed communiqué – only six pages long, compared with the 32-page wonder produced at last year’s G7 – was evidence of the Italians’ struggle to find common ground.

The main culprit was Mr. Trump, who did his best to isolate himself from the other G7 leaders – from Canada, Germany, Britain, France, Japan and Italy – on several issues pressing on the global order.

On fighting terrorism and cyberterrorism, he was in five-star-general mode, leading the charge with British Prime Minister Theresa May, who is managing the aftermath of the terrorist attack in Manchester that killed 22 people.

What can you say about any of this? Putin owns Trump and he's in charge of American foreign policy. There's no other explanation for what's happening. We've covered the compromising position in which the Trump Regime finds itself, and we've had a great time laughing at Trump's gaffes and his lack of stamina and his weird habit of wandering off in the middle of things. But, really, what's completely evident is that the Russians are seeing everything break their way. The Europeans are on their own, the NATO alliance is fractured, and Trump refused to validate an American commitment to Article 5.

If you're Putin, you know you've won. America is divided, Americans have not idea what really happened during the 2016 election, and the President of the United States is doing exactly what the Russians wanted him to do. He's a lurching, out of control stumblebum who has done more to destroy America's diplomatic prestige than any other president in American history, and that includes George W. Bush and Warren G. Harding, neither of whom knew a goddamned thing about foreign policy.

Instead of hearing TV pundits talk about the law, and how all of this might have been treason last year, stop and think for a minute. Who won? Putin did. Who lost? Americans who care about decency and leading the free world lost. That's where we find ourselves after another nightmare week of the Trump presidency.