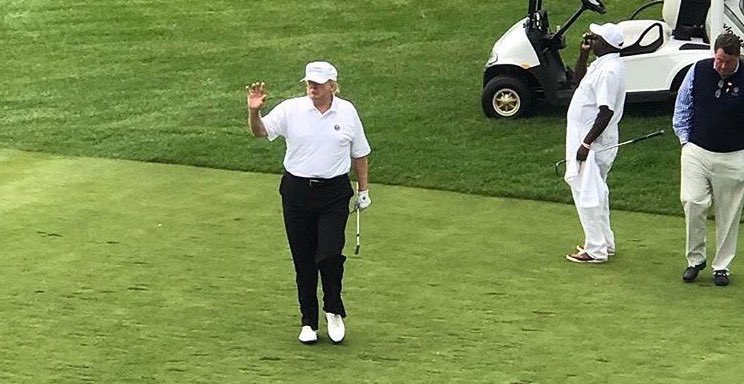 This is how the Trump Regime takes a meeting:

President Donald Trump defended himself Saturday against criticisms of his stay at his golf course in Bedminster, New Jersey, this weekend, saying it is saving the country money.

"The reason I am staying in Bedminster, N.J., a beautiful community, is that staying in NYC is much more expensive and disruptive," the President tweeted.

Trump returned to Manhattan Thursday night for the first time in his presidency to meet with Australian Prime Minister Malcolm Turnbull, who joined the President to commemorate the 75th Anniversary of the Battle of the Coral Sea aboard the USS Intrepid, the aircraft carrier-turned-museum parked along Manhattan's West Side.

But rather than staying Trump Tower just several blocks east, he is spending the weekend at Trump National Golf Club, about an hour away from the Big Apple.

Trump initially defended the move in a tweet on Friday morning: "Rather than causing a big disruption in N.Y.C., I will be working out of my home in Bedminster, N.J. this weekend. Also saves country money!"

Trump went on to claim that he's taking "meetings" at his golf resort, and, yes, that's just some lie he came up with while tweeting on the toilet. There's a perfectly good White House in Washington D.C. and it comes with access to a perfectly good Camp David, so what are we talking about here? Trump doesn't care about the amenities anymore. He's shilling for his properties. That's what this is about.