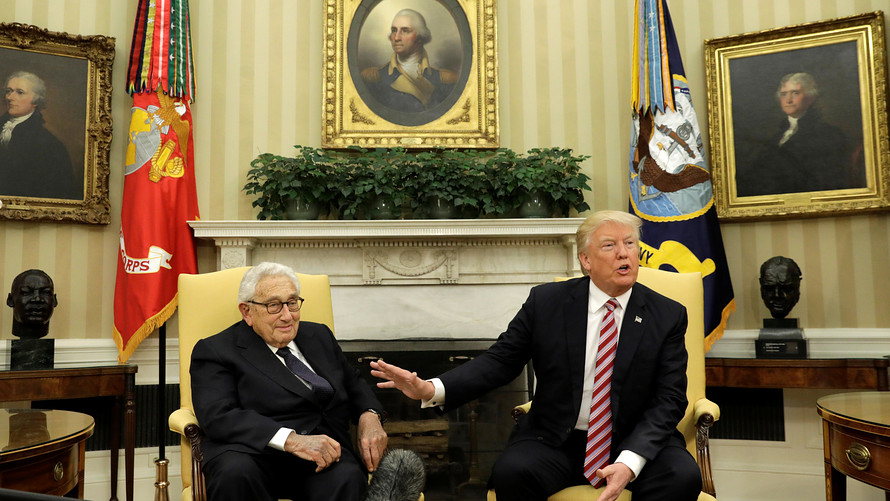 My other question was, why is there a bust of Winston Churchill in the White House? Aren't there any famous Americans we should honor instead?

If you're running things in the Trump White House, and if it's the day after you sent your personal body guard to fire the Director of the Federal Bureau of Investigation, then the thing you really want to do is bring Henry Fucking Kissinger into the Oval Office so you can sit there with your legs spread apart, trying to make people remember what it was like when Richard Milhouse Nixon was run out of town on a rail. I would think that, coming on the heels of the most Nixonian thing you've done yet you would want Nixon's go-to guy for war crimes and bad advice sitting right there, practically on your lap like some oversized Japanese fetish sex doll. This one's called Henry, and it's for the fetishist who likes them roly-poly but with a side of Germanic insouciance and triple-dick action that you can wave in the face of the liberal media. I would think that you would want to have people thinking of you and Nixon all day, every day because that would really make people tired of winning, am I right?

That's exactly what you do when you're competent and in control of the optics of every situation, no matter how ridiculous or surreal. Doesn't is seem like the Sixties and Seventies all over again? Complete with acid flashbacks, war crimes, and coverups? When is someone going to get around to reminding Trump that Nixon was the bad guy?