My Faith in the Democratic Party is Unshaken 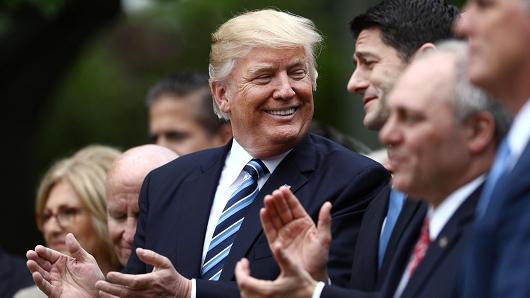 Do you know why the GOP passed a so-called Obamacare repeal bill today? Because it will never be signed into law:

Senate Republicans said Thursday they won't vote on the House-passed bill to repeal and replace Obamacare, but will write their own legislation instead.

A Senate proposal is now being developed by a 12-member working group. It will attempt to incorporate elements of the House bill, senators said, but will not take up the House bill as a starting point and change it through the amendment process.

"The safest thing to say is there will be a Senate bill, but it will look at what the House has done and see how much of that we can incorporate in a product that works for us in reconciliation," said Sen. Roy Blunt, R-Mo.

"We are going to draft a Senate bill," added Sen. Chuck Grassley, R-Iowa. "That is what I've been told."

The working group has been meeting for weeks, said Senate Majority Whip John Cornyn, R-Texas, a member of the group.

They are kicking the can even further down the road. They don't want their fingerprints on anything that actually gets put into effect. The House gets to turn around and shrug their shoulders because, even though they passed a massive tax cut for the wealthy and the worst possible health care insurance law ever devised, nothing will stick to them because the Senate is about to bail them out with a flimflam of a law no one will ever get to sign into law. The GOP's base has a symbolic win they can whip out in front of whoever challenges them--they can say "we repealed Obamacare."

Nothing like that is going to come to fruition however. They know that the Senate will craft something far more watered down and that it won't pass because they don't have 60 votes. They'll be able to say "we tried to repeal Obamacare but the Democrats wouldn't let us do it." Meanwhile, the real shenanigans will occur offstage.

This sets up the real effort by the Republicans to offer tax cuts and tax reform for the wealthy, increased spending on defense, and the gradual strangulation of Obamacare without being held responsible for killing it. They'll craft budgets that starve the law of the funds it needs and they'll be able to walk away with clean hands. They are enabled in all of this by the work of lickspittles like Chris Cilliza who, in the face of an immoral act of denying relief to the American people, found a way to focus on the fact that he thinks people are going to keep hating Democrats. Tell me again who is on the right side of history--the people fighting to protect the interests of people in America who get sick or the people who want to give billionaires a tax cut and pay for it by forcing people to pay over $100K out of pocket should they ever get cancer.

Yes, they voted to kill Obamacare. But, no, it didn't happen because it won't get out of the Senate. There's only one party who is on the correct side of history here and it's the Democrats. Show them some love for doing the right thing or don't because of her e-mails. I really don't care. I am unshaken in my faith in the Democratic Party and you should be grateful someone is standing athwart history saying no to the right people about the right thing.

You want good government? Well, that's not happening any time soon. So, instead of having your health insurance destroyed right away, the Republicans are going to keep the framework of Obamacare in place so people can continue to hate the Democrats while they destroy it from the inside, depleting it of subsidies and letting insurers raise premiums to absurd levels. It's the single most cynical and shit-headed strategy of governance you will ever see in your life. They're betting on the confusion and the most meaningless votes imaginable and they're betting that, but the time the fall of 2018 rolls around, people will go back to being complacent.

As Charlie Pierce said today, Goddamn them all.