Military Strikes Are "After Dinner Entertainment" For Trump's Stooges 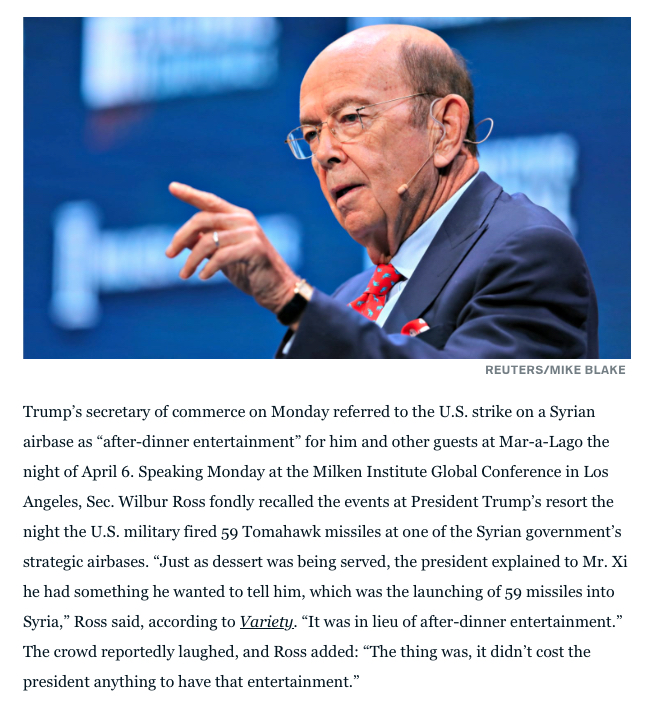 I think we should write this one down and remember it because you really can't top this comment from the Commerce Secretary. Military strikes are "after dinner entertainment" for this crowd? Are they ghouls? What's wrong with this man who vetted him?

This is a textbook case of being temperamentally unfit for office. Millions and millions of dollars worth of hardware, sent downrange to kill people in the name of the American taxpayer, and it didn't cost Trump a thing? Had just one of those missiles misfired or fallen short and killed civilians, would these people have felt cheated at their fancy dinner? How awful they are. How truly horrible these people really are when they're in public. These are the people who are sending Americans into harm's way. Old, confused white men who worship at the altar of blood and guts.

We know they vetted Michael Flynn, and he was nuts from the get-go. But Wilbur Ross is undeniably glib and out of his goddamned mind for saying this in public. You can say whatever you want about the craven, incompetent buffoons that Trump has put in place, but this guy has dialed up the shitheadedness to a level not really seen as yet. It's as if someone with the social responsibility and awareness of a 4Chan troll wrote his remarks.

Wilbur Ross is a disgrace and he should resign for being flippant about the use of military force. The Trump Regime does not understand the way the world works and we are going to suffer for it, I can guarantee you that.