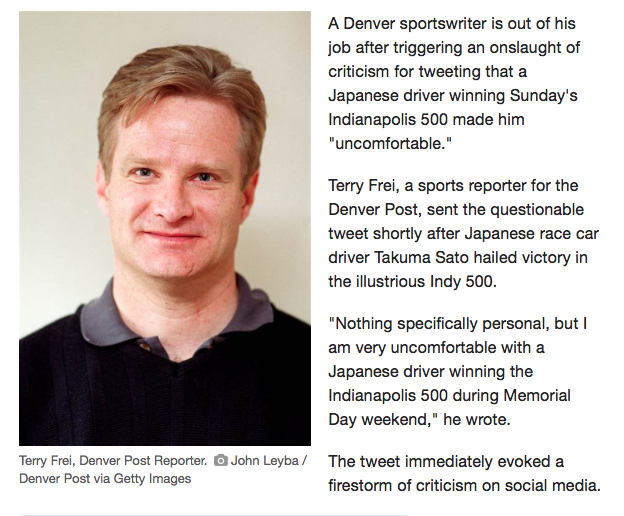 Terry Frei is out of a gig, and that's how the marketplace of ideas works. You can say whatever you want, but your employer has to decide whether or not your speech is in direct conflict with their goals as an organization. If you're a newspaper in a major American city, having someone on your writing staff who says racist things will likely lead to boycotts and condemnation, so the obvious answer is, you fire the jackass who says racist things.

No one's freedom has been taken away here. The Denver Post has just said, "no racist jackassery for us, thank you very much." And, no matter how you slice it, this is misplaced racism and phony patriotism wrapped up in a slew of bullshit:

Frei apologized Sunday but not after doubling down in his response to the first wave of heat by tweeting "THIS is what Memorial Day is about. Dave Schreiner's death in Battle of Okinawa. Not for squeamish or 'sensitive.'"

Schreiner was an American football player who died while serving alongside his Frei's father in World War II, and whom the sportswriter had written about in the past.

Unsurprisingly, another round of criticism followed, leading Frei to delete his tweets and replace them with "I apologize."

Oh, yeah. Double down on that shit sandwich, and don't forget to pander to even the most subtle of white nationalists when you do. Where did Frei get the idea that he could win friends and influence people if he just doubled down on his racist swill? Could it be that living in Donald Trump's America would embolden Frei to say something equally ridiculous while wrapping the American flag around his shoulders? Maybe Trump will give him a pardon. Maybe Fox News will give him a better gig. I hear Colin Cowherd still has a job, so it can't be all bad for race-baiting fuckups out there. Perhaps the reason why Frei said what he said is because he knows that sports writing is one of the remaining places where you can spread indecency around and laugh it off.

Frei went with the oldest trick in the book. Wave the bloody shirt! Use the moral authority of being related to a dead veteran who fought in the only good war to justify being an asshole in 2017. Yay! Who doesn't love a bloody shirt being waved around?

This is a broken country right now. If a man of Japanese descent winning the Indianapolis 500 freaks you out, then a woman being president, or a black guy getting paid to give a speech, or someone defending someone else from a bigot and losing their life for it has to be the straw that broke the camel's back for a loser like you, snowflake.