General McMaster Sat There and Did Nothing 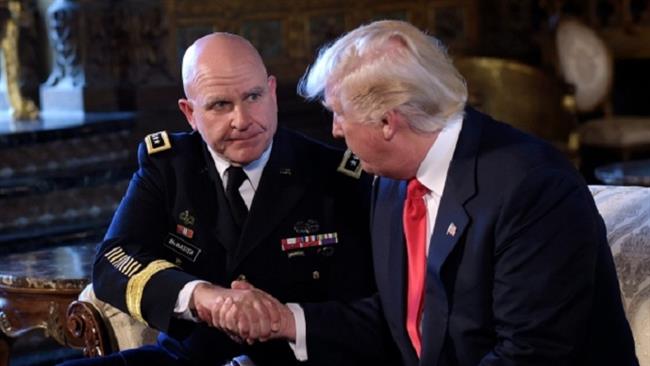 Instead of focusing on the most recent stupid thing said by Trump, why not focus on something a little more relevant and important?

There's something about this that is unsettling to say the least:

"I just fired the head of the FBI. He was crazy, a real nut job," Trump said, according to the Times. "I faced great pressure because of Russia. That's taken off."

Trump's Oval Office meeting with Russian Foreign Minister Sergey Lavrov and Russian Ambassador to the US Sergey Kislyak came one day after Comey was fired.

In and of itself, Trump's statement is shocking because it sends the message that he feels he can say what he wants about anyone without regard to their status, their achievements, and their abilities. It sends a message to the Federal Bureau of Investigation that Trump has all but declared war on their agency and will, no doubt, seek to install a director that will reshape and destroy the careers of executives and agents that fight back against his hold on the Executive Branch. Who else would Trump speak about in this manner? If he can say this about Comey, then he can call someone a sex offender, a boob, a pussy, or a cocksucker and no one will call him on it.

What bothers me about this story is that General H. R. McMaster sat there and let Trump speak to the Russians about the former Director of the FBI. I see no evidence that McMaster stopped the meeting, corrected Trump, defended Comey, or spoke up on behalf of his fellow American. I don't know about you, but for the President of the United States to speak that way about an American in front of two Russians and their press agency (who recorded the whole damned thing, apparently) is well beyond the very loose bounds of decency in which we would expect Trump to operate. This was indecent and an affront to this country's understanding of what it is and what it represents. This was a betrayal of our values and it exposed America's dirty laundry in front of two Russians and the people they dragged with them into the inner sanctum of American power.

McMaster should resign immediately. He sat there and said nothing while the President politicized the removal of a man who has served his country with honor and distinction (even though, yeah, that fucking letter he sent Jason Chaffetz about Hillary's fucking E-mails). He sat there while his president insulted a formerly high-ranking American official in front of foreigners in the Oval Office.

I'm not a fan of James Comey, but he's a fellow American. We may differ politically, but if someone spoke ill of him, I would defend him based on the principle that dictates that you don't expose Americans to the ridicule of Russians in the goddamned Oval Office. See, there's our side and then there's their side. If you can't defend a fellow American, what the hell good are you? If McMaster can't find the moral courage to speak up on behalf of a fellow American in such a meeting, what the hell does his phony act of being the only "adult" in the room mean? It's a sham. When presented with an opportunity to get on the right side of history, McMaster sat there and let the boss reveal classified info and talk about a distinguished American like this was an episode of Real Housewives of Beverly Fucking Hills.

When the hell is someone going to hand him his book and say, "hey, fucker--maybe you should read this and get back to us on how important it is to tell the president things he doesn't want to hear."

General McMaster is no different than the Five Silent Men letting LBJ to go ahead and escalate the United States into the Vietnam War. If McMaster can't speak up on behalf of Comey, how the hell is he going to tell the president not to start a war or bomb an ally or get revenge on some government that insults Trump's rotten kids? He has failed his own test and history is not going to treat him with anything more than disdain for his inability to speak truth to power. I have to believe that everyone he condemned in his book is laughing at the irony of everything that has transpired.