An Explosion of Fake News 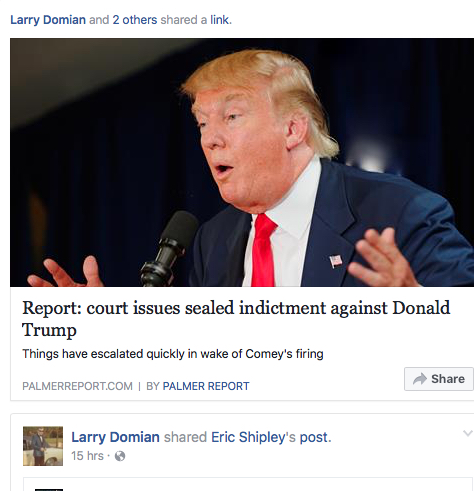 I have chosen to take a few days off because the explosion of fake news links and the desperation of others to find some way to quickly impeach the president has made it difficult to cut through the noise.

My Facebook feed expanded to include numerous fake news sites over the weekend. This is because the Russians/Eastern Europeans who work on behalf of the destabilization of American/Western democracy have been freed up to work on other things now that the French election is over. They have been engaged in destabilizing the German elections that are due later this year. These efforts are now much easier to identify. Virtually everyone who tries to friend me on Facebook links to some agitator with no web history and seems suspect.

The "Palmer Report" is one site that spreads links with fake profiles and/or bots throughout Facebook, desperate for traffic. Virtually nothing on that site can be identified as being real and usually links to hyperbole. Old stories are recycled and reposted by people who don't know any better. I have done what I can to block these stories but they are everywhere.

As to whether or not Trump has been indicted, please. The individuals who issued this were quick to fix their initial mistake. They said that a FISA court had issued an indictment, which is false. The FISA court approves surveillance used as evidence in indictments handed down by U.S. Attorneys. To say that there are now indictments is to believe the disinformation campaign being used to deflect criticism from the Trump Regime. They are dumping fake information into the media with targeted leaks and by selectively releasing information in order to figure out who is doing the leaking within the White House.

Any legal challenge against Donald Trump will involve a massive effort in terms of presenting evidence and challenging the assertions of his lawyers. He deflects all legal challenges by launching a massive campaign against the process itself. When a court goes after Trump, he throws sand in the gears. Be prepared for months and months, if not years, of legal wrangling and delaying tactics.

As to the swirl of the last week, I believe the paranoia and the incompetence, but I don't think that the FBI has been able to build a case as of yet. If they have, great. If not, we have to be patient and we have to avoid citing fake news stories. This only serves to undermine the serious threat to the Constitution that the entire Republican Party now presents.

Everything that has gone wrong over the last 110 days is entirely a failure by the Republican Party to adhere to norms in American political life. Congress has failed to provide any adequate check and balance against the actions of the Executive Branch. That is the real story of this past week and it is the reason why everyone needs to pause and look at the information being presented to them. Does it come from reputable sources with actual verifiable information or does it come by way of some jackass trying to gather up more clicks?