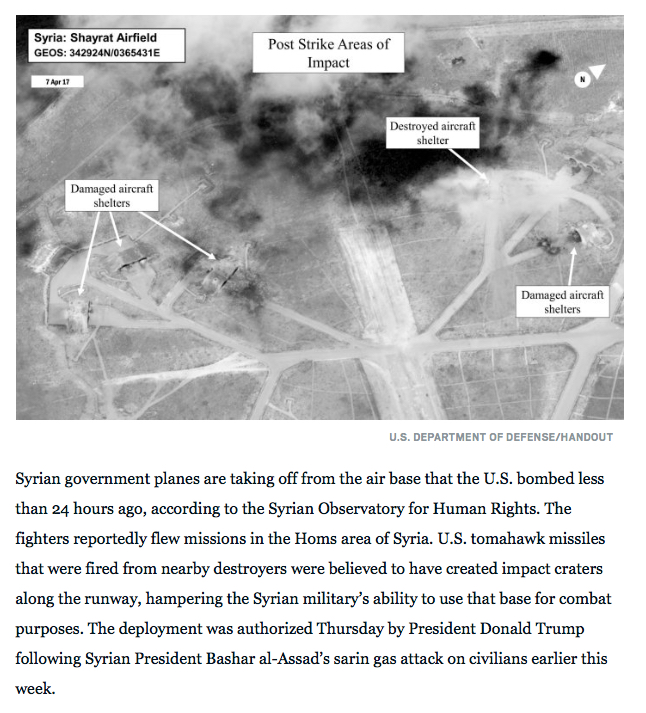 According to news reports, we only "hampered" the Syrian government's ability to bomb its own people. That's low energy and sad, if you ask me.

So, let's recap. Trump was offended that the Syrians killed people with chemical weapons. Under pressure at home to explain why everyone around him has a Russian FSB agent planted squarely up their ass, he decided to "wag the dog" and bomb a military target in Syria. Firstly, though, he warned his Russian business partners to clear out of the area so that no one would get hurt. Then he limited the strike to a barely effective salvo of Tomahawk missiles. He didn't send the Air Force with heavy bombers and crater-producing ordinance--he just outsourced it to the Navy, who was happy enough to cycle through some missiles that were probably not going to be used any time soon.

Trump's first military operation was a failure, and got a Navy SEAL killed. This time, he failed to hit a stationary target with Tomahawks.

I don't know about you, but I have already been lectured about being "critical" of this move. Fuck that shit. This was a stupid, unnecessary escalation of tensions in the region. It accomplished little or nothing. And if you're on your high horse, using the deaths of children to give you the moral authority to applaud this move as "doing something," you've been sold a bill of goods. We damned sure should have done something, but warning the enemy they are about to be bombed is absolutely fucking ridiculous. Personally, if they had killed the pilots in the squadron that dropped chemical weapons on their own citizens, I would not shed a tear. But, because we are led by incompetent fools, we couldn't even accomplish that. If you want to rain hell down upon people who do horrible things, don't make a phone call first. Wait until imagery shows them in the middle of normal operations, and hit everything at once. Hit their planes on the runways, hit their personnel when they're lined up for a meal, and take out the whole facility with a massive strike. We couldn't even do that.

Are you tired of winning yet?