Trump is Playing With the Lives of Millions of South Koreans 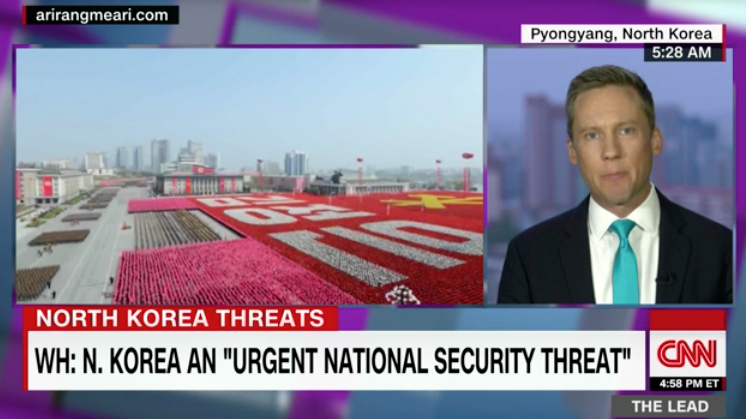 North Korea is not an "imminent" or "urgent" threat to the national security of the United States. This is just idiotic blustering from the media turning into disinformation for gullible Americans. No, the people who are at risk live within forty or fifty miles of the DMZ that runs between North and South Korea. Every living soul in Seoul is within range of North Korean artillery and missile fire, the likes of which would be devastating if it were ever unleashed.

About four in 10 Americans say North Korea is an immediate threat to the US in the wake of the nation's recently stepped-up attempts to posture itself as a military threat to the US and others, according to a new CNN/ORC poll.

In the poll released Thursday, about 37% of respondents consider North Korea an immediate threat to the security of the US. The  new CNN/ORC poll was released in the same week that President Donald Trump summoned the full Senate to the White House for a briefing on the North Korean threat.

The only reason why this is considered a threat is because Trump made it one. He invented a crisis out of thin air. The North Korean regime, much like Trump's own regime, thrives on fear, chaos, and a cult of personality.

There are numerous entities trying to hype the threat of the largest missiles in the North Korean inventory--do not believe them. They are theoretically capable of reaching the Pacific Northwest if nothing goes wrong; but, so what? One submarine can obliterate the northern half of the peninsula. The North Koreans know that it would be the end of sunshine and parades and what passes for fun in Pyongyang if they were to somehow make that missile fly as far as Seattle.

We have one fool who is just as big of a fool as the other, and they don't know how to walk away from a chance to demonstrate to the world who is crazier. That's not an existential threat to the United States, but it is one to everyone within range of a conventional weapon in South Korea. I remember apartment building after apartment building, as far as the eye can see, when I last visited Seoul. It is a thriving, densely packed, wonderful city full of people who deserve to live without fear. Due to the personal failings of Donald J. Trump, every one of them now has a reason to wonder what tomorrow is going to bring. The reason why we got here is because Republicans couldn't wait to vote for someone who would make liberals mad.

Get back to me on how this all turns out.