They Love the Trumps But Hate the Clintons 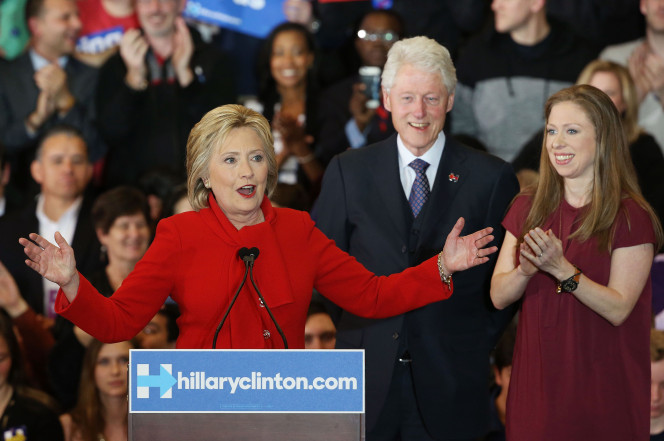 The Clintons gave us peace and prosperity, safety and security, health care for children, and jobs, jobs, jobs. The Trumps are handing us a bill for their many conflicts of interest, the ruination they are inviting upon us, and the extra hefty price we will pay for our declining influence in the world. The question is, who would want the Clintons to go away except people who want more starvation and horror in the world:

Since losing the most winnable presidential election in modern American history, Hillary Clinton has, among other things: given a series of high-profile speeches, joined Gov. Cuomo at his public unveiling of tuition-free college, refused to rule out a run for mayor of New York and issued an online video message exhorting fellow Democrats to fight on in her name.

“The challenges we face,” she said, “as a country and a party, are real.”

Clearly, Hillary still sees herself as the leader of the Democratic Party. And why shouldn’t she? Democrats have been locked in an abusive relationship with the Clintons for decades, enabling, explaining, convincing themselves that next time will be different. Party faithful hew to Hillary’s excuses for losing to Donald Trump: It’s James Comey’s fault, plus the Russians, white supremacists, misogynists, the deplorables and immobilized millennials, among other things.

Her losses in 2008 and 2016 have been framed as things that happened to Hillary — not one, but two Black Swan events that stymied her historic destiny.

How is it that Democrats have fealty here, let alone sympathy? How is it that Hillary routinely walks into standing ovations at Broadway theaters? Where is the realization that Hillary is to blame or the rational rejection of a two-time loser?

Here's what this idiot does not understand--we've seen the Clinton's tax returns. We will never see Donald Trump's tax returns. Therein lies a huge difference in terms of who should really go away.

As for the election, no, I don't blame Hillary for losing. The funny thing is, were it not for those thumbs on the scale, Hillary would be president. As Democrats, our fealty is to facts and reason. The fact is, the election was stolen. The fact is, we'd be better off with Hillary as president. The fact is, millions are waking up to this and they're voting with their feet. Did you miss those protests?

If you did, then you're engaged in intellectual dishonesty. And, in a year's time, there won't be but a handful of people who will admit to voting for Trump, and most of those will be the dead-enders, that 33% of Americans who will never sway in their opinion that even the worst president is exactly what they've always wanted.